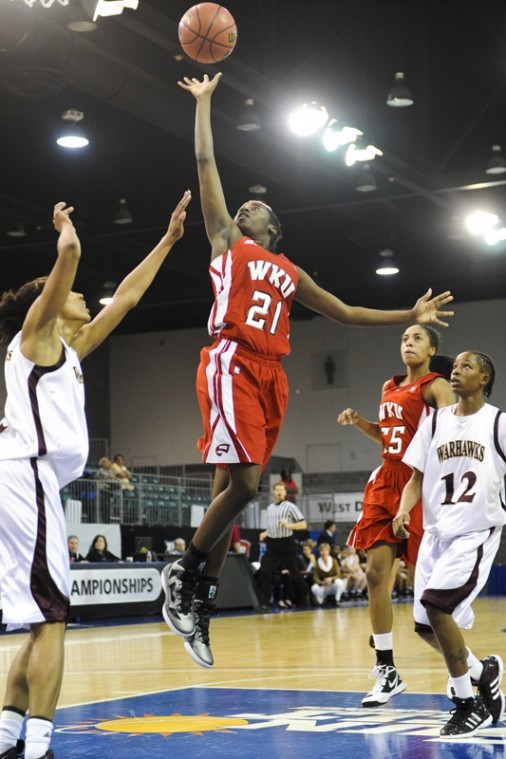 HOT SPRINGS, Ark. — A youth movement is carrying WKU into the second round of the Sun Belt Conference Tournament.

The two freshmen combined for more points (32) than what came from the team’s five seniors (22 points).

Govan said much of the motivation for her big night came in wanting those five seniors to extend their WKU careers another day.

“All I thought about before the game was that I wanted the seniors to go out with a bang and didn’t want this to be their last day in a uniform,” Govan said. “So I just kept telling myself ‘Do it for the seniors.'”

Govan scored a game-high 22 points on Saturday on 8-of-11 shooting.

Much of Gooch’s contributions came in the first half after senior forward LaTeira Owens was sent to the bench at the 15:01 mark of the half after picking up two fouls.

Gooch accounted for seven points and seven rebounds in the first half, and finished the game with 10 points and nine rebounds.

“We talk about freshmen no longer being freshmen, I think these two have demonstrated they belong at this level,” Head Coach Mary Taylor Cowles said of Gooch and Govan. “…I think they just realize that it’s time to take a deep breath and relax and that’s what these two have done.

“They’re very, very nice basketball players and I think coming into the Division I level they’ve held back a little bit, but I think they realize our team needs them to let loose and play the game they’re very capable of playing. I think that’s what we’ve seen both of them doing.”

Turnovers were one of the few stats not in WKU’s favor on Saturday.

The Lady Toppers had 26 turnovers, marking the third time in four games the team has turned the ball over 26 times.

WKU’s worst offender in that category on Saturday was Govan, with six.

The Lady Toppers are now averaging 20.8 turnovers per game.

“We continue to turn the basketball over,” Cowles said. “…We just got lucky tonight that we hit shots at the other end when we did get in the half-court…We’ve got to do a much better job of taking care of the basketball.”

WKU has a familiar opponent waiting on it in the Sun Belt quarterfinals.

The Lady Raiders rely heavily on their five starters, Kortni Jones, Laken Leonard and Shanice Cason at guard and Icelyn Elie and Ebony Rowe at forward.

“We can’t be inconsistent, which I think is what we were from the first time to the second time we played them,” Cowles said. “We’ve got to handle the pressure, they’re going to bring it. Everyone knows that about Middle Tennessee.

“…They’re just very deliberate and very good at the offensive end, so we’ve got to be as good defensively as they are offensively.”

– North Texas, Florida International and South Alabama all also won on Saturday. Arkansas State, ULM and Louisiana-Lafayette were all eliminated from the tournament