McDonald ending career ‘with a bang,’ just like he planned 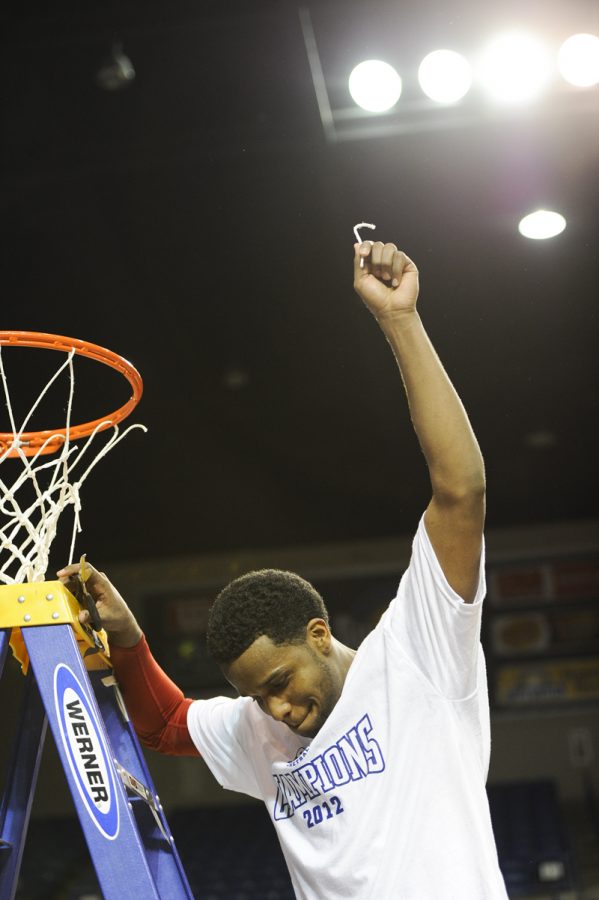 Senior guard Kahlil McDonald holds up his piece of the net after WKU won the Sun Belt Conference Tournament championship. WKU defeated North Texas 74-70 to earn its 22nd appearance in the NCAA Tournament and first since 2009.

HOT SPRINGS, Ark. — Kahlil McDonald finally got his hands on the Sun Belt Conference Tournament Championship trophy after the players and coaches had cut the nets down, and he wasn’t about to let go of it.

“Nah, man, this is the first time I’ve gotten to hold it!” McDonald replied.

It was that moment that the senior guard from Brooklyn, N.Y., has talked about wanting to experience ever since WKU’s regular season ended.

The team’s only senior was on a mission to end his career “with a bang” and leave Hot Springs with a championship ring.

With a late 3-pointer to give WKU a 70-68 lead, then two clinching free throws with 1.5 seconds left, McDonald ensured he’d have some jewelry to don on his ring finger.

“Speechless and excited and just thanking God,” he said after the win. “Without Him we couldn’t do it. Hard work plays a part and so does resiliency and toughness. We were down 13 again and came back and won. I just give all the glory to God.”

McDonald has seen his role shift several times in just the two years he’s been at WKU after transferring from Blinn College, going back and forth between the team’s main 3-point threat to running the point out of necessity.

But over the past couple weeks, he’s had one role with a young Topper bunch as the season neared its end and postseason play started, and that was to be a leader.

“Kahlil down the last six, eight games, whatever it’s been, has been terrific. Just what a senior’s supposed to be,” Head Coach Ray Harper said. “He’s been a leader. He’s been on my hardest worker list everyday and I’m happy for him that he’s going to have an opportunity to play in an NCAA Tournament.

“When I look around that locker room, those freshmen are going to play in multiple NCAA Tournaments. I believe that. This is just the beginning, but happy that Kahlil will get the opportunity here in another week or two.”

McDonald may have one game left in his career, or seven.

The freshmen, as Harper said, have many.

And as he ends his WKU career soon, he said there are plenty of good things in store for the future of WKU basketball.

“They know what it feels like now,” McDonald said of the freshmen. “It’s the ultimate feeling and I’m pretty sure they’ll win it again and again and again for three more years… It’s an experience a lot of people don’t even get to have.”