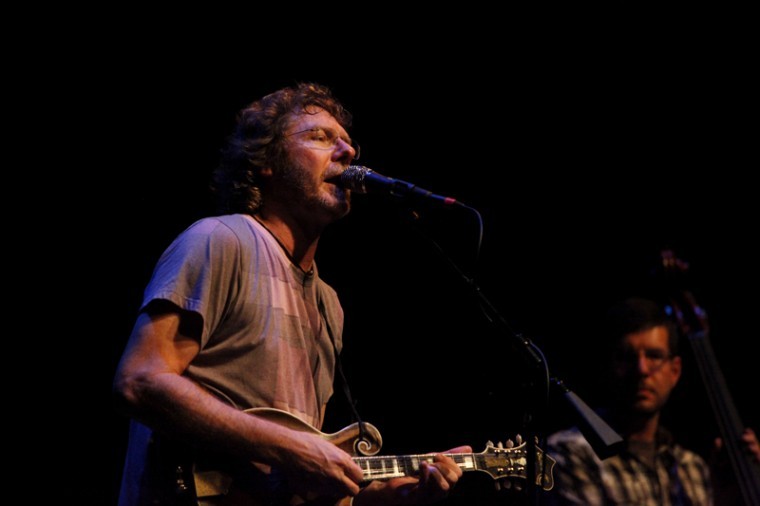 Bowling Green native, Sam Bush, played at the Southern Kentucky Performance Arts Center on Friday night. Bush is a Grammy Award-winning multi-instrumentalist. He is known for his mandolin skills and as the "Father of Newgrass."

The 59-year-old mandolinist conducted an audience ranging from people he attended grade school with to WKU students to sing, dance, and howl along with his unique brand of music dubbed “newgrass”.

In March 2010, legislation passed in Kentucky that officially named Bowling Green the “Birthplace of Newgrass,” and Bush the “Father of Newgrass.”

Bush took advantage of the situation by inviting guests out to spice up the show.

“What time is it?” Bush asked the audience.

Burch performed a few songs with Bush as a duo and then remained on stage for the majority of the rest of the show.

Bush, a multi-instrumentalist, showed off his skills on the guitar and fiddle before inviting blues guitarist Kenny Lee from his supergroup Duckbutter onstage to finish out the show to resounding applause.

Multi-instrumentalist and WKU alumnus Alex Day said that opening for Bush was definitely a high point for the band.

“To get a show like this, I think it really shows that our hard work has been paying off for us,” he said.

It was SKyPAC Programming Director Jan Zarr’s first Bush show, and he was impressed.

“I didn’t realize how rich this area is with music,” Zarr said.

Zarr said the audience of just over 1,200 people was exactly what SKyPAC was hoping for.

Among the crowd was Bowling Green senior James White, who came to the concert with friends.

“Sam was excellent as always,” said White, who had seen Bush perform before.

White said he encourages more students to come out and see Sam next time he plays in town.

“Even if you don’t like newgrass, just seeing someone that good at what they do is pretty incredible,” he said.

White said he’s excited about SKyPAC opening up and that he hopes it opens the door for more popular artists like Bush to play in town.

“I’m glad that Bowling Green has something like this now,” he said.

White wasn’t the only one thankful for SKyPAC. Bush said he hopes to associate his annual newgrass festival with the venue and plans to come back and play again as soon as possible.

“I’m so proud of Bowling Green for having this place, because now we have a venue that we can all go tell our friends about,” he said. “I think it’s going to lead to a lot of good things for this town.”