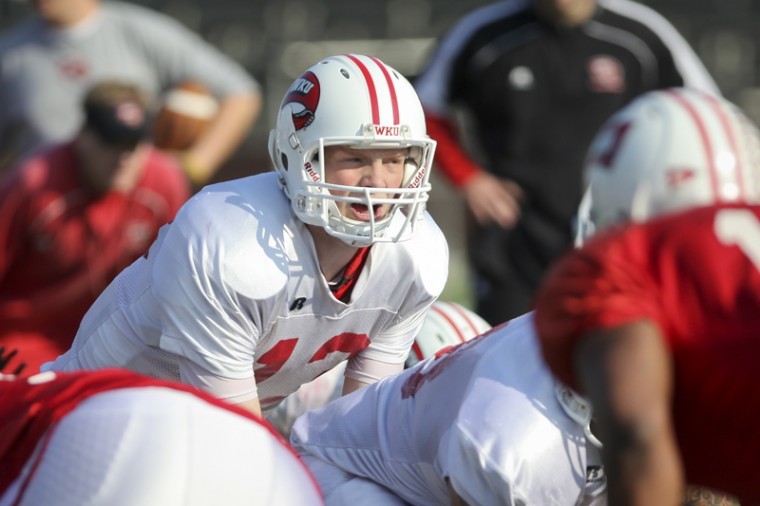 Senior quarterback Kawaun Jakes will start under center when WKU takes the field this fall, but the Toppers have other options should something happen to him.

Jakes will be backed up this season by several younger prospects looking to take the helm in the future.

Sophomore Brandon Doughty was the only returning quarterback other than Jakes who saw playing time under center last season. Doughty started against Indiana State on September 17 but tore his anterior cruciate ligament in WKU’s first offensive series.

Jakes will also be backed up by redshirt freshman James Mauro, who didn’t play last season, and sophomore DaMarcus Smith, a transfer from Central Florida.

Smith, a Rivals.com four-star recruit from Louisville Seneca High School has been practicing but has yet to be cleared by the NCAA Eligibility Center to compete in games.

Sheridan said the younger quarterbacks need to improve before they can play this fall.

“Those guys are just young,” he said. “They kind of need to understand what wins us games and what loses games, taking care of the ball and that sort of thing.

“We’re still working with them.”

The departure of All-American running back Bobby Rainey has left a big hole in the WKU depth chart. The Toppers are planning to replace the WKU record-holder with a group of running backs who they hope can generate similar statistics.

art said it’s important for the team’s younger running backs to understand their role on the offense this season.

“We’re not asking them to be Bobby Rainey. We want them to be who they are and help this football team,” he said. “Those guys are starting to understand that and they take pride in that running back position.”

Juniors Keshawn Simpson and Antonio Andrews, along with sophomore John Evans, are expected to take most carries for WKU, though other running backs are on the roster and practicing.

They have big shoes to fill. Rainey left as a two-time Sun Belt Conference rushing champ and finished his time at WKU as the all-time leader in single-season and career yardage.

Toppers moving away from yellow jersey

At a glance, no one at spring practice has stood out this season. That’s because no one on the team is using the yellow “non-contact” jersey so far.

Taggart said no one on the team is wearing the jersey right now because no one has earned it.

He also said with the returning and incoming talent, he doesn’t have to worry injuries or lack of death being an issue.

“We’re getting away from the yellow jersey, and again, we’re building our football team now,” Taggart said. “We’re starting to get the depth that we need, and we don’t need the yellow jersey anymore.

“When guys go down, we’ve got somebody to replace them and keep going, so we’re not concerned about injuries from that standpoint.”