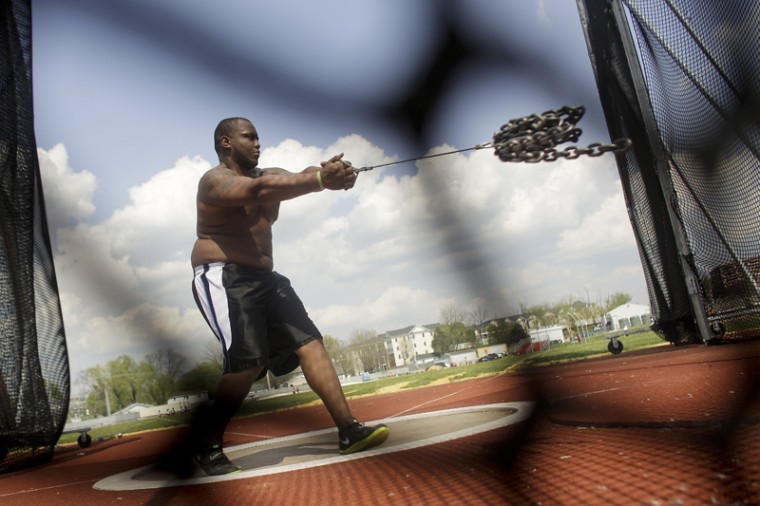 Hopkinsville junior Houston Croney, a thrower on the track and field team, practices by throwing chain links at the Ruter Track and Field Complex on Wednesday.

ice of junior thrower Houston Croney at a WKU track and field competition. He’s the one rooting for teammates with just two words: “Oh yeah!” — a phrase he uses from MTV’s “Jersey Shore.”

This Hopkinsville native took home this year’s Sun Belt Conference title in the weight throw with a marking of 60-6.50 — making for the second all-Sun Belt honor of his career. But things haven’t always come easy for Croney.

Entering into his freshman year, Croney first stepped foot onto WKU’s Ruter Track and Field Complex as a walk-on. Assistant coach Craig Morehead said that he earned his spot on the team and grew because of the experience.

“He was one of those people you take on as a walk-on because he’s strong and fairly agile, and he has a lot of hard work,” Morehead said. “That first year was a bit of a struggle, but it’s going to be a struggle for any freshman, whether you’re a walk-on or on scholarship.”

A graduate of Christian County High School, Croney first began his throwing career in ninth grade.     “In high-school, I didn’t have a throwing coach — we just went out there and did our own thing, and we clowned around a lot,” he said.

“Coach Morehead is dedicated because he puts more than an average effort into his coaching… He’s always there for us, and he believes so much in us. Because when I got here, I had a tryout, and he was like ‘We’re starting from scratch. Forget everything you knew about throwing,’ and he has believed in me ever since.”

Another believer in Croney’s efforts is senior teammate and friend Monteka Flowers. She and Croney have known one another since the start of his career, and she said that Croney is the same funny guy off the field as he is on it.

“He’s very laid-back — all he wants to do is enjoy life and have fun,” Flowers said. “He’s usually the one hyping everybody up, jumping around getting everyone ready when we’re lifting… He’s like the team’s hype man, and he motivates us to do better, because when we hear those words — ‘Oh yeah!’ — the team knows it’s time to get ready.”

An exercise science major, Croney plans to stay in Bowling Green after graduation and work as a personal trainer.

As the second oldest sibling in a family of two brothers and five sisters, the ability to put a smile on others’ faces comes from who Croney surrounds himself with.

“There are multiple things that inspire me… my parents and family, teammates and the kids I work with at the Boys & Girls Club, because they are always asking me how I do at meets and what I do,” Croney said. “Guess you could say I kind of feed off of others as well.”