COLUMN: Bjork latest to follow the money out of WKU 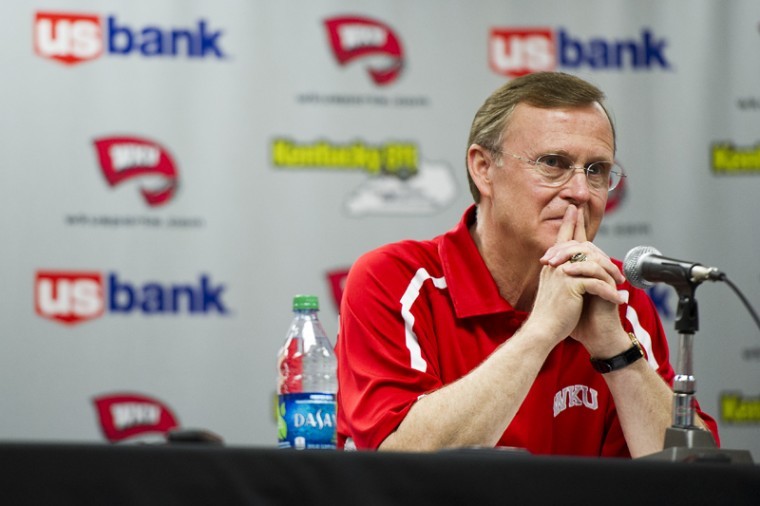 The WKU president wishes the newly departed the best of luck at their next stop and thanks them for their time at WKU.

He talks about the person’s qualities and the things he brought to the position.

Then Ransdell expresses disappointment that the school couldn’t hold on to them.

The person was men’s basketball coach Dennis Felton in 2003. It was Felton’s replacement, Darrin Horn, in 2008. And on Wednesday it was Athletics Director Ross Bjork.

Bjork was named on Wednesday as the new AD at Mississippi, marking the end of a two-year tenure at WKU.

Similar to the cases of Felton and Horn, who both left for more money at Georgia and South Carolina, respectively, Bjork has left for what will likely be an increase of the $185,000 paid by his base salary at WKU.

Wanting to compete on a national level, but losing talented individuals to schools, particularly those in the Southeastern Conference, with fatter wallets — it’s the same sad song for Ransdell and WKU.

“We will compete with SEC institutions,” Ransdell said. “But will we lose quality people to those institutions primarily because of the dollars in play? Sure.”

Ransdell consistently talks of the program’s desire to compete at the highest level in Division I athletics, proudly comparing his players and teams to its Football Bowl Subdivision competition.

WKU doesn’t simply aim to be better than other mid-major programs, it wants to be competing with big-name schools on the field in every sport.

But the school lacks the funding to stay on that level for an extended period of time.

Compare home football attendance as an illustration of the disparity between Bjork’s current school, WKU, and future school, Ole Miss.

That total, one of the SEC’s lowest, is more than three times more than the average total of 16,637 fans that were in Smith Stadium for Topper home games last fall.

Then you start factoring in the TV deal the SEC has with ESPN and CBS, and compare it with the relatively meager payout Sun Belt schools get from TV rights.

Finally you look at the alumni base of Ole Miss, which exceeds that of WKU in both total persons and total dollars.

Crunching the numbers it becomes painfully obvious that a mid-major like WKU and an SEC school like Ole Miss just aren’t on the same playing field.

It’s hard to fault Bjork for seeing the money and moving up the career ladder.

He’s 39 years old, making him the youngest AD in the FBS.

Bjork’s moved around in his career as an athletic administrator, holding key roles at Missouri, Miami (Fla.), and UCLA before taking the job at WKU. If he does well at Ole Miss, he’ll probably leave for a bigger job once again.

The first line of the four-year contract Bjork signed in 2010 calls for “AD’s assurance that he will serve the entire term of this Employment Contract, along term commitment by AD being critical to UNIVERSITY’s desire to run a stable athletic program.”

Obviously he didn’t make it that far.

“I expected a longer tenure than that,” Ransdell said of Bjork’s two years. “But on the other hand I’m not naive in such matters.”

And why should he be naive? Ransdell has seen young talent be put in place at WKU, only to be taken away when someone with more resources comes calling.