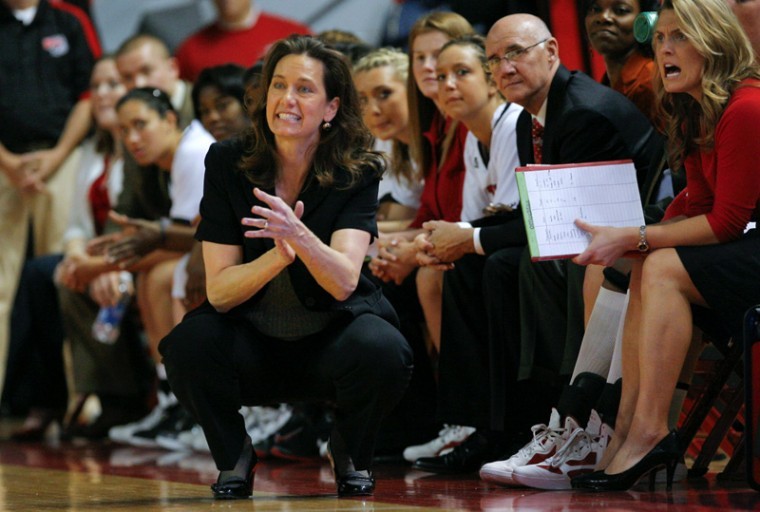 Athletics Director Ross Bjork said throughout the 2011-2012 season that decisions on the women’s basketball program wouldn’t be made until after the year ended.

Four days after the team’s season ended, Bjork took to the podium in Smith Stadium on Thursday to announce the firing of Head Coach Mary Taylor Cowles.

Cowles, a former Lady Topper player and assistant, was fired after 10 seasons at the helm of the program, and 21 seasons associated with the program overall.

Bjork said the decision to fire Cowles was “difficult because of what Mary stands for and for what her character is all about.”

Much of the decision had to do with energy around the program, he said.

“We weren’t performing at the level that we needed to and that we expect, and that our facilities and history can support,” Bjork said. “…Our history of attendance and packing the arena… is something that we’ve been lacking, in terms of energy.”

Cowles, who Bjork said was informed of her release on Thursday morning, didn’t return the Herald’s request for comment.

She did release a statement to the Bowling Green Daily News, where she thanked the WKU family for “an incredible journey” during her 21 years associated with the Lady Topper program.

“The tremendous student-athletes, encouraging loyal fans and the friendships I have made are all a testimony to storied program of Lady Topper basketball,” Cowles said. “I am a proud graduate with two degrees from WKU and have always appreciated the faculty and staff of the university. A heartfelt Thank You goes out to each and every person that I have encountered along the way.”

An official interim coach will not be named, but assistant Camryn Whitaker will serve as the “point person” for the program during the transition period, Bjork said.

Whitaker, a Lady Topper point guard from 2000-2005, just completed her first year as a WKU assistant.

The team’s other assistants, including Latrice McLin, Time Riley and Curtis Turley, will all continue to serve in their current roles while a coaching search is conducted, Bjork said.

Cowles’ 10th year as head coach, which ended on Sunday with a 66-57 loss to Middle Tennessee State in the second round of the Sun Belt Conference Tournament, included several negative milestones.

The Lady Toppers finished the year 9-21, marking the most losses in a single season in program history.

WKU lost three times to Middle Tennessee State, pushing its losing streak in that series to 10 games, the longest in its history against MTSU.

Meanwhile the team compiled its first-ever losing record in Diddle Arena (6-7) in front of an average of 1,153 fans per game.

“That was a factor,” Bjork said of declining attendance. “When they run out of the tunnel they need to be inspired by our crowd. That was difficult, watching that this season.”

Just as he said when men’s basketball head coach Ken McDonald was fired on Jan. 6, Bjork said the search for Cowles’ replacement will take on a national level.

“You find the best person, and if they happen to have (WKU) ties, that’s great,” he said. “We’ll capitalize on that. But I think the best coach for our program is out there, and we will search nationally.”

She trails only WKU Hall of Famer Paul Sanderford, who won 365 games.

They were eliminated in the first round in both trips.

Cowles played for the Lady Toppers from 1988-1991, and was a member of three WKU teams which won Sun Belt Championships.

She finished her playing career with 1,072 points and ranks No. 31 on the school’s career scoring list.

She was a part of 10 trips to the NCAA Tournament as either a player, assistant or head coach.

“Coach Cowles will always be a Hilltopper,” Bjork said. “We thank her for her contributions to our program as a student-athlete, assistant and head coach.

“She has been a leader, a mentor, a great example. That’s why those factors make today very difficult… She told me that she’s always going to be wearing red and waving her red towel.”

WKU goes into next season with three rising juniors and seven rising sophomores.

WKU has three scholarships available for the 2012-2013 roster.

“We have great kids that want to compete and win, but we’re not winning games,” Bjork said. “… We’ve got to find players that can have an impact and build around the nucleus we have coming back.”