Cowles not concerned with outside perceptions of program 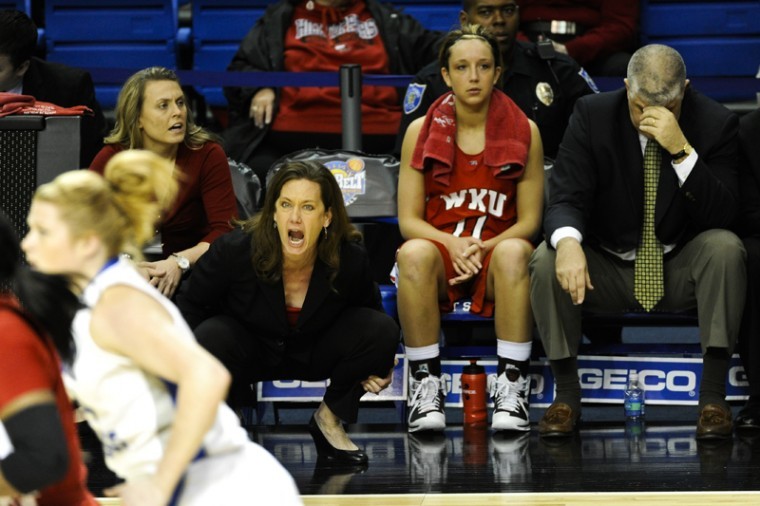 Head Coach Mary Taylor Cowles yells at her team at the Sun Belt Conference Tournament against FIU on Sunday, March 4 in Hot Springs, Ark. WKU lost 65-57. Cowles responded to questions about her future as WKU's head coach following the loss. "My passion is to coach basketball," she said. "If that's their decision, we'll move forward."

With WKU finishing the year with the most losses in school history, rumors have swirled as to whether the 2011-2012 season would be Cowles’ last.

She said after Sunday’s loss that her job status isn’t her decision.

“My passion is to coach basketball,” said Cowles, a former Lady Topper player and assistant when asked if she thought she had coached her final game at WKU. “If that’s their decision, we’ll move forward.”

The person most heavily involved in that decision will likely be Athletics Director Ross Bjork.

He declined comment after the game and said to refer to comments he made about the program on Feb. 26.

On that day, following a 77-62 loss to MTSU in WKU’s regular season finale, Bjork said the women’s basketball program would be evaluated after the season, as he said is standard operating procedure for all sports at the school.

Cowles said avoiding negative comments about her program has been “easy” because she avoids sources of commentary.

“I don’t Facebook, or Twitter or read the newspaper and I don’t get on the Internet so it’s pretty easy for me,” she said. “…We don’t really talk about it. That stuff doesn’t really get discussed in our locker room or in our offices.

“For those people that read it or are a part of posting it or whatever else, that’s a different story. Unless you know the inner-workings of our program, you really don’t know what our program is really about.”