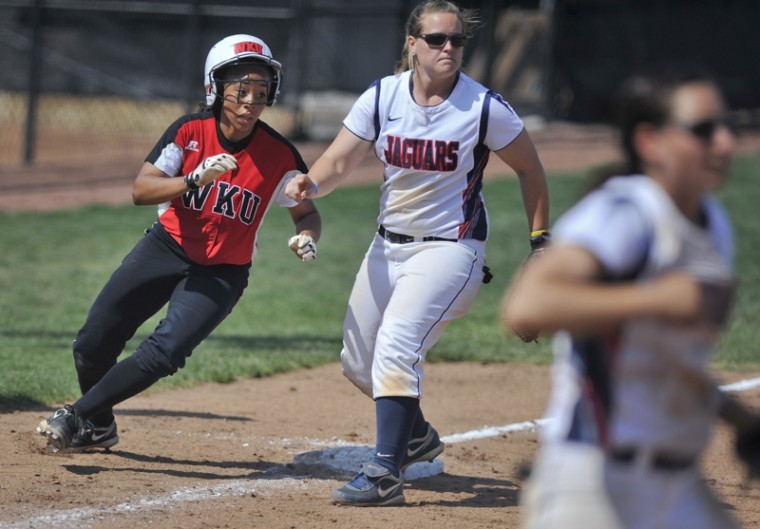 Sophomore pinch runner, Tiffany Gooch, advances to 3rd base after a base hit against South Alabama on Sunday afternoon at WKU Softball Field. WKU won 5-4 .

After suffering a sweep last season at South Alabama, WKU was looking for some revenge as it faced the Lady Jaguars at home this weekend.

But things didn’t always go as smoothly as WKU hoped in the three-game series.

WKU (19-10, 4-2) started off the weekend at the WKU Softball Complex by dropping both games of a doubleheader against the Lady Jaguars (17-8, 5-1) on Saturday. But the weekend ended on a high note for the Lady Toppers as they were able to pull out a close 5-4 victory Sunday afternoon.

During the first leg of the doubleheader WKU was held hitless until the bottom of the fourth when freshman Preslie Cruce and sophomore Amanda Thomas hit back-to-back singles to start the inning.

Cruce would eventually come around to score on a close play in which she took advantage of a slowly hit ground ball by junior infielder Mallorie Sulaski.

That would end up being the extent of the scoring for WKU in that game. South Alabama, who was already up 3-1 after the Lady Toppers scored, would get two more runs off of sophomore pitcher Emily Rousseau in the seventh to win the game 5-1.

Head Coach Tyra Perry said that the recent losses had been a shock for her team.

“We’ve been playing really tight,” she said “Once you lose and you’ve been winning, it’s really hard to play to win instead of playing to not lose. So we’ve been talking to them about staying loose.”

Despite a stronger effort from junior pitcher Kim Wagner, who got six strikeouts and gave up only one run, WKU fell in the second game 2-1.

Many of the players and fans in attendance felt the Lady Toppers were robbed of at least one more run in the sixth inning when junior catcher Karavin Dew was called out at home on a close play.

“I thought it was a very bad call,” Perry said. “I don’t think [the umpire] was paying attention and got surprised.”

What Perry, and many in attendance, thought was a blown call came at a critical moment with the game tied at one.

Wagner would surrender a bases loaded walk in the sixth to break the tie, and the offense failed to push the tying run across in seventh despite senior outfielder Laura Smith being at third with one out.

Perry also said that the team had some bright spots in their performance despite the game not being their sharpest.

The offense that had put up two runs in two games showed up for WKU in the third inning of the series finale on Sunday.

The Lady Toppers put up five runs in the third inning off of lefty pitcher Hannah Campbell. Smith, who had a key two RBI double, said the changes the batters made were mental.

“(Campbell) had eight strikeouts the other day and only had two today. We took her out of her game,” Smith said. “I think it was a complete mentality change.”

The Lady Jaguars’ seventh inning comeback attempt came up short after scoring three runs to bring them within one. Wagner got the last two outs to end the game and get the close 5-4 victory for WKU.

Smith was encouraged by the win on Sunday and hopes they can prove they deserved to be ranked higher than where the pre season polls had them.

WKU will face in-state rival Kentucky at the WKU softball complex on Wednesday at 7 p.m.

“We know what kind of team we have, and we definitely don’t see ourselves as the 7th seed in the conference,” Smith said.