T is for Twins: WKU students are best friends with their twin 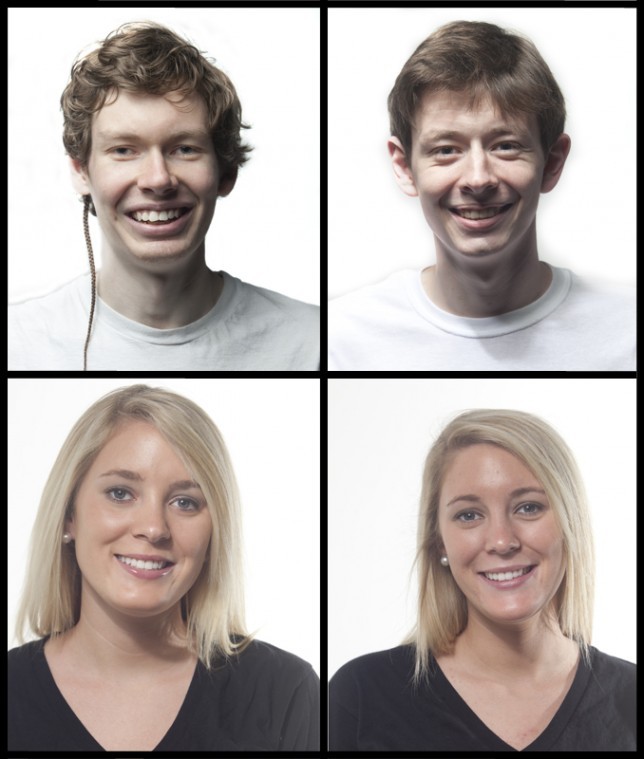 Seniors Seth and Jacob Short (top row, left to right) and sophomores Ashley and Austin Mullis live their lives as twins. “We don’t really switch, people do it on their own,” Ashley said. “Nobody can tell us apart.”

Have you ever wondered what it’s like to have a twin?

They have lived together all their lives, and even in college, they share a house.

“It’s convenient,” Jacob said. “At the end of the day, I think, we’d rather live with each other than with some random person.”

Seth and Jacob said they fought a lot when they were younger. However, becoming older and enrolling in college  together helped them grow out of childhood craziness.

The twins said they both like to joke around with people in a good way. If they looked more alike, they would take  advantage of that by switching places and attending each other’s classes or doing other things that one of them doesn’t want to do.

“We both like messing with people, and that would be an extremely enjoyable thing to do,” Jacob said.

Despite having lived together for that long and looking similar, Seth and Jacob said they have developed different personalities, thanks to their mom who didn’t try to dress them alike and treat them as the same person.

“We are thankful for that,” Jacob said. “Every once in a while I would borrow a button-up shirt when trying to look nice, but that is it. I didn’t want to be a clone.”

Although their personalities are different in some ways, they can’t escape a typical twin thing: being similar in other ways and making similar choices in life.

“We have pretty similar tastes in movies, music and friends,” Jacob said.

And Seth said, “We both have really creative personalities.”

The longest time Seth and Jacob went without seeing each other was three months in the summer. They’re fine with a possibility of living apart after graduation.

“As far as it boils down to is that he is just a friend that I am related to,” Jacob Short said. “So it’s pretty much naturally the same thing with any other friend. We still have to deal with each other in Christmas and Thanksgiving.”

Not all twins at WKU can do that well without each other.

Bowling Green sophomores Ashley and Austin Mullis are mirror-image twins, a rare occurrence. One is right-handed, and the other is left-handed, and all marks on their bodies are on the opposite sides.

Both women came to WKU because they couldn’t imagine being apart.

“We had to go to the same place — we don’t do good separated,” Austin said.

The longest time the twins were apart was on the last spring break for 10 days, and they said they really missed each other.

“We called each other every five seconds,” Austin said.

A couple of years ago, Ashley and Austin were arguing a lot, but now they said they share everything — a room, clothes, friends — and the only thing they still fight about is their car.

Ashley and Austin frequently check up on each other because of the feeling that something is not all right.

“We have that twin thing when she is sad, I am sad as well,” Ashley said. “But it’s not that we can read each other’s minds.”

Both sets of twins said the best thing of having a twin is that there is always a friend to rely on and spend time with — they’re never bored.

“We are literally bound together in faith forever,” Seth said.