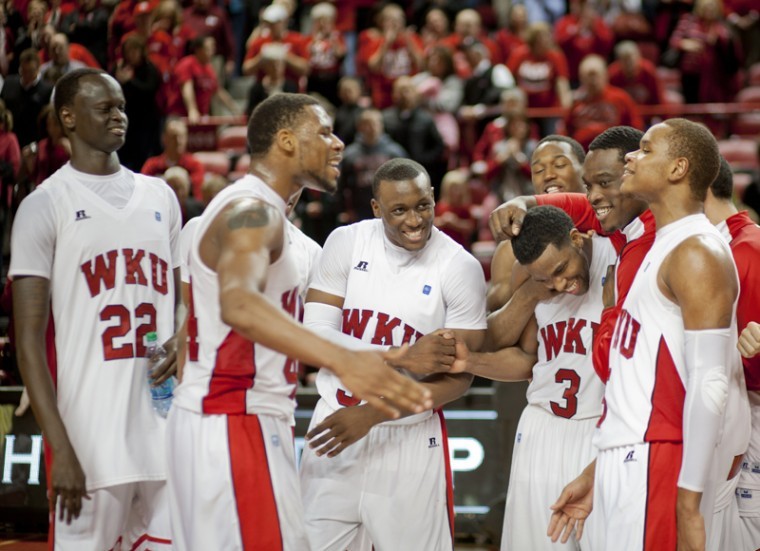 WKU will enter the Sun Belt Conference Tournament as the No. 7 seed. The Toppers will be looking to become to first No. 7 seed to win the tournament and earn and automatic bid to the NCAA Tournament.

Jamal Crook woke up Tuesday morning and for some reason the movie “300” popped in his head when thinking about this weekend’s Sun Belt Conference Tournament.

It’s a story of how a small group of soldiers band together to fight a large army.

“I kind of looked at ourselves as ‘300,’” the junior guard said. “We’ve got 15 players against, like, the world, basically. Everybody’s going to be against us, so we have to stick together as one.

“Like ‘300,’ they went out and fought thousands of people. It’s 15 of us against hundreds of people. We’ve just got to stick together and just fight for each other and win the battle.”

WKU (11-18, 7-9 Sun Belt) will have to endure four days of battle if it wants to win the tournament and earn an automatic bid to the NCAA Tournament.

The Toppers enter the tournament as the No. 7 seed, having to win four games in four days to be crowned champions. They haven’t won more than two games in a row all season.

Also, a No. 7-seed has never won the Sun Belt Tournament.

WKU has advanced to at least the semifinal round in seven straight tournaments. After earning the No. 7 seed instead of the projected No. 8 seed, the Toppers have positioned themselves to make another run to the semifinals.

The Toppers are now on the opposite side of the bracket from Middle Tennessee State — the tournament’s No. 1 seed — and have two potential matchups in the first two rounds against teams they beat this season.

They’ll take on Florida International (8-20, 5-11) in the first round at 8:30 p.m. on Saturday and have a potential second round date with No. 2 seed Arkansas-Little Rock at the same time on Sunday.

WKU split the season series with FIU, with each team winning on the road. The Toppers beat UALR 65-53 on Jan. 21 at Diddle Arena.

WKU enters the tournament on a two-game winning streak, including a win over MTSU, a team that Head Coach Ray Harper said was having “one of the best seasons in Sun Belt Conference play ever.”

Harper said his team is peaking at the right time.

“It’s how I hoped we would be playing,” he said. “I think over not only the last two games, but the last four, we won three of four and even the game we lost was a game that for the most part was one of our better games until maybe the last five minutes.”

He said the focus is of course on the team’s first round game against FIU. But he couldn’t help himself from being thankful that his team won’t meet MTSU in the second round.

Harper drew comparisons to the Blue Raiders and No. 12 Murray State, who he called the “darling of college basketball” this season. But he said after seeing both teams in person (WKU lost to Murray State 70-59 on Dec. 1), he said he’d rather play the Racers, given how hot MTSU has been lately.

“Florida International’s gonna be a stern test for us, but I would not have been real excited to be Middle Tennessee’s next game,” Harper said. “I’ve seen that movie play out in the past and usually doesn’t end the way you want.

Crook and freshman guard T.J. Price also both said they felt like the team was peaking at the right time.

Price said everyone is “doing everything at the right time.”

Even so, senior guard Kahlil McDonald said the team is looking the conference tournament as if it’s a new season.

“I’m pretty sure every team is looking at it like that right now,” he said. “I think that we’re really taking that approach, especially with our record being 7-9 in conference.

“That’s approach is probably the best approach, honestly, because nobody’s won anything right now — except for Middle, they won the regular season championship. Besides that, that ring is up for grabs and we want it and we’re going to get it.”