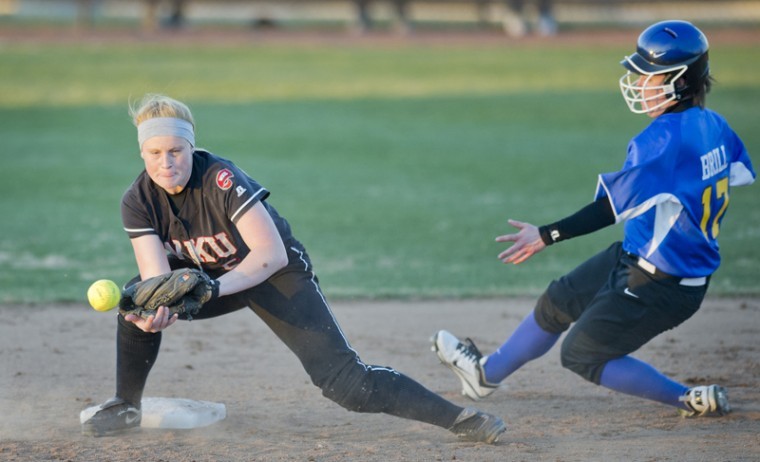 Sophomore shortstop Amanda Thomas attempts to get an out during a game against Morehead State Feb. 25 at the WKU Softball Complex.

With every at-bat a WKU player takes, the personalized chants and cheers of support for the batter can be heard by everybody in the ballpark.

Junior infielder Amanda Thomas said she’s usually too focused to pay attention to exactly what her teammates are saying.

“I don’t really hear them when I’m up to bat,” the Mesquite, Texas native said. But Thomas said the energy provided by the cheers has a greater effect on the teams they face.

“Last weekend when we played (Florida Atlantic) we tried to be really loud and get into the other team’s head,” Thomas said. “And it worked. We could see how they reacted to our cheers and we used that as momentum to get us going.”

During that series of games against FAU Thomas went a combined 6-for-8 with six RBI. Her performance during the games in Boca Raton, Fla., at the 2012 Buzz Classic earned her this week’s title of Sun Belt Conference Player of the Week.

Thomas said she was surprised to hear she won the award when it was announced on Monday since she wasn’t focused on her own performance.

“The weekend before I had a pretty bad game, went 0-for-4, so I just tried to focus more on the team’s success and with that my own success came,” she said.

Thomas’ own success came in the form of a series of strong plate appearances in which she batted .500 and had a slugging percentage of .652, with eight RBI with six home runs.

Head Coach Tyra Perry was also impressed with the way Thomas helped her team to victory in all three games against FAU.

“She’s a tough competitor and she does what the team needs to help the team win,” she said.

Perry said that there isn’t really any big difference in Thomas’ approach to the game compared to her first two years as a Lady Topper. Perry credits Thomas’ in-game experience with her strong start to this season.

“She’s more experienced now so I think that experience has helped her become more comfortable with herself,” she said. “She’s always had the talent.”

Along with her improved batting average numbers, Thomas has also been one of the top home run hitters on the team with six under her belt for the season.

“Whenever we get in close situations and she’s coming up to the plate, we’re always excited about it,” Perry said. “We know she has the ability to change the game with one swing.”

Though Thomas’ accomplishments at the plate may overshadow her defense, Thomas said she feels confident in the field as well.

“I feed a lot off of my teammates for that,” she said of her defense.

Thomas said she still doesn’t focus too much on her own performance and is more excited about what the team is capable of as a whole.

“I am 100 percent confident in this team that we can take this conference in regular season and win the tournament,” she said.

Thomas said she and the rest of the Lady Toppers are hopeful after starting their conference schedule 3-0 and are looking forward to continuing their strong conference start as they face South Alabama at home on Saturday and Sunday.

“We want to take each game one game at a time and not get too far ahead of ourselves,” Thomas said. “We haven’t won anything and we’re not gonna stop until we do.”