WKU pulls off record-setting comeback to earn First Round win 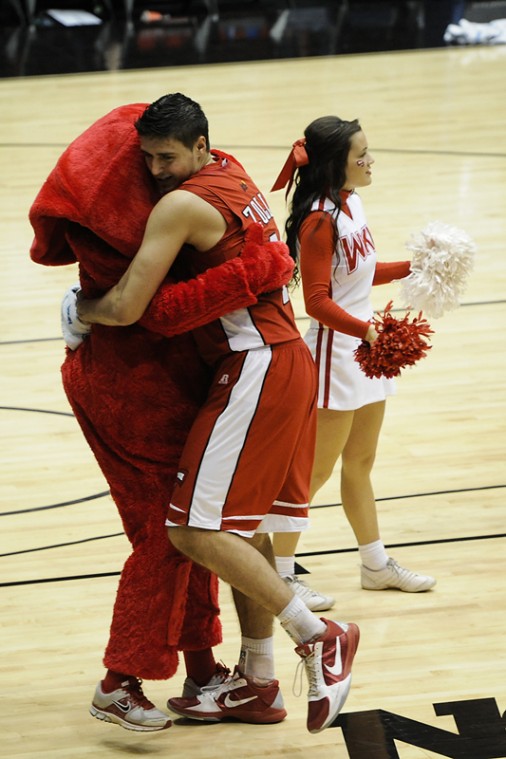 Just as they’d done throughout the Sun Belt Conference Tournament, the Toppers came from a double-digit deficit to steal a win at the end. This time it was a record-setting comeback that happened on a much bigger stage.

This comeback included a 22-5 game-ending run as the Toppers came back from a 16-point deficit to beat Mississippi Valley State, 59-58, in the NCAA Tournament First Round — WKU’s first NCAA Tournament win since 2009.

The Toppers had completed the biggest comeback in the last five minutes of a game in NCAA Tournament history and did so in front of a crowd which included President Barack Obama and British Prime Minister David Cameron.

“Wow. I don’t know where to begin,” Head Coach Ray Harper said. “I keep saying about these young men, they’re resilient. They won’t quit. They were ready to play some more basketball.”

With the win, 16 seed WKU moves on to the Second Round to play No. 1 overall seed Kentucky at 5:50 p.m. CST on Thursday at the Yum! Center in Louisville.

For 35 minutes, WKU played “out of character,” as Harper put it.

Perhaps it was playing in front of the president or just the young Topper team — all of whom were playing in their first NCAA Tournament game — working out some nerves. Either way, Harper said he noticed the jitters from his team.

It proved to be nearly costly for WKU.

MVSU forward Cor-J Cox threw down an alley-oop with 9:03 left to give the Delta Devils a 46-32 lead.

Then the comeback started.

It started with a free throw from freshman forward George Fant which was followed up by a jumper from freshman guard Derrick Gordon to cut the lead to 53-40 with 4:47 left.

Moments later, freshman guard T.J. Price scored and got fouled, then hit the free throw to cut the lead to seven.

Freshman forward O’Karo Akamune, who Harper said was a crucial contributor down the stretch on both ends, followed that up with a wide open dunk. Fant then stepped in the passing lane on MVSU’s next possession to get a steal at mid-court. He was fouled and hit both free throws, cutting the lead to 53-52 with 2:28 left.

Credit the WKU full-court press for the comeback.

“We were out of options,” Harper said. “We tried our zone press two or three times. I probably didn’t have the right lineups in there.

“…We knew we had to have (sophomore forward) O’Karo (Akamune) in the game to make it work. And guys did a good job. We did a good job of keeping the ball out of (MVSU guard Kevin Burwell’s) hands, and when he did get it, really good job of trapping him.”

It forced the Delta Devils into turnover after turnover.

“A couple of turnovers can lead into that right there,” Burwell said of MVSU’s lead slipping away. “I was really trying to compose our guys, getting into our sets before we started our offense.

“But, unfortunately, we couldn’t do that. So that’s what happened. We started turning the ball over.”

WKU had come back, but still needed to get over the hump and take the lead. Gordon had several chances to do just that but couldn’t capitalize.

He missed four free throws short that would have given WKU a lead, then missed a 15-footer short.

“This is not my first time being in that situation,” Gordon said. “So, I mean, I can’t get down on myself. I mean, this is the NCAA Tournament. It’s either win or go home. So I couldn’t dwell on (missing shots).”

Price was there to bail him out.

The Slidell, La., native scored out of an in-bounds play, got fouled and hit the free throw to give WKU the go-ahead score and a 57-54 lead. It marked the Toppers’ first lead since they led 4-2 in the opening minutes of the game.

Price said he simply couldn’t bear the thought of losing the game, especially after such a spirited comeback.

“Personally, I know I would have cried…that’s just how much I love this game,” he said. “I just didn’t want to be one and done. That wouldn’t have been a good feeling.”

MVSU Head Coach Sean Woods said his team was rattled down the stretch and got “a little bit beside themselves.”

“Normally in a situation like that, maybe it’s one guy or two,” Woods said. “But when it’s all five, it was like a snowball effect.”

WKU came back despite turning the ball over 28 times and shooting 30.6 percent from the game. But thanks to just 36.1 percent shooting from MVSU and a 60-32 rebounding advantage, WKU was able to finish off yet another late comeback.

The Toppers shot 25 percent in the first half and played much of it without Fant, who was named the Sun Belt Tournament’s Most Outstanding Player last week. He picked up two early fouls and sat for the final 13 minutes of the half.

Fant was adamant after the game that he wasn’t at all surprised WKU mounted the comeback.

“Honestly, I knew my team was going to keep fighting,” Fant said. “Even when we was down — I don’t know how much we was down — but we were sure down about a lot. We kept fighting.

Harper said he simply looked at his team late in the second half and told them they were going to win.

“The final horn hadn’t gone off,” he said. “We’re going to believe until the bitter end. I think if you’re a coach or you’re a player that doesn’t believe that, you’re in the wrong profession. You need to find something else to do.

“Because if I don’t believe that we have a chance, I’m not giving those kids my very best effort. I’ll go down with them fighting, win or lose.”

Woods is no stranger to NCAA Tournament disappointments, as he was starting point guard on the UK team that lost to Duke in the 1992 Elite Eight on a buzzer-beating shot by Christian Laettner.

“Don’t let this game define your basketball career, especially here at Mississippi Valley State University,” Woods said, “because you’ve gone over and beyond the expectations for a school of our magnitude.”

Woods misses out on a chance to face his alma mater, but now Gordon gets a chance to play one of his high school teammates — UK forward Michael Kidd-Gilchrist. It’s also a chance for freshman forward Vinny Zollo to face the school to which he was once committed.

Harper said he doesn’t want the players to get caught up in any of the hype of one-on-one matchups or any storylines. He just wants the team to focus on UK and concentrate on not making the same mistakes they made Tuesday night, saying WKU needs to play “flawless” basketball.

“They may have the top two picks in the (NBA) Draft,” Harper said. “Everyone’s picking them to cut down the nets in New Orleans. So, hey, we’re going to roll in there and see what happens.”