Men’s Basketball Notes: Newcomers growing up before our eyes 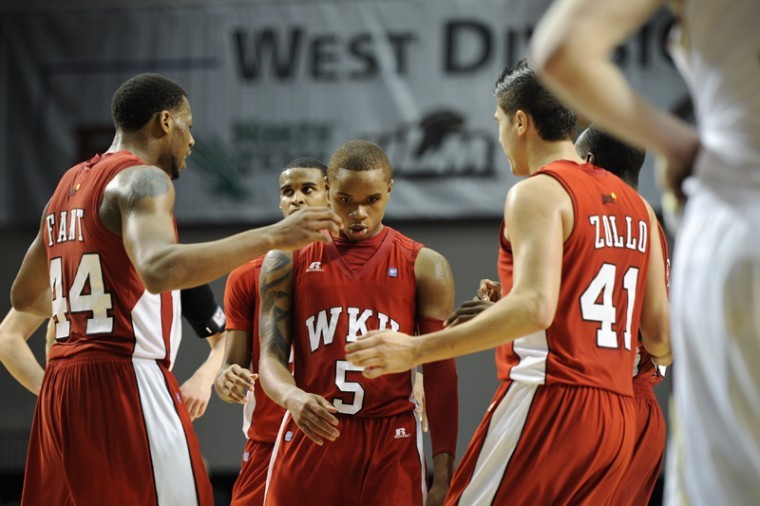 HOT SPRINGS, Ark. — The freshmen on this team don’t want to be thought of as freshmen. They’ve made that plenty clear this season.

That doesn’t mean there’s no room for them to mature, though. As the season has progressed, and during the Sun Belt Conference Tournament, this young bunch of Toppers has had to grow up, and do it quickly.

Even through just three tournament games, forward George Fant said the freshmen have grown up “a lot.”

In WKU’s past two wins — both that have gone down to the wire — it’s been one of the fresh-faced Toppers who’s stepped up when the team needed it most.

Against Arkansas-Little Rock in the quarterfinals, it was guard Derrick Gordon who carried the team on his back with 25 points and 15 rebounds, including 13 defensive rebounds.

Against Denver in the semifinals, it was Fant who took over, asserting himself in the post en route to a 19-point performance.

Both players had key defensive plays down the stretch in both games as well. On Sunday, Gordon had a late steal that resulted in a bucket on the other end during WKU’s lead-taking 17-0 run.

Fant then helped seal the win with three blocked shots in the game’s final three minutes.

On Monday, it was Gordon who came up with a block on Denver’s Royce O’Neale that effectively — with the help of two ensuing free throws from senior guard Kahlil McDonald — put the Pioneers away.

It wasn’t just those two youngsters that have stepped up for WKU during this improbable run.

Even sophomore forward O’Karo Akamune — also playing in his first Sun Belt Tournament after transferring from junior college prior to the season — has been a factor for the Toppers. His shut-down defense on UALR’s Courtney Jackson prompted Head Coach Ray Harper to label Akamune as the “unsung hero” of Sunday’s game.

The current run is a culmination of a young team evolving into hard-nosed, defensive-minded, mature, winning basketball team.

“For us, we just try to learn from every single practice and every single game that we went through and learn from it,” Zollo said. “Because of that, the maturity level has gone up so much on our team. We soak in everything from practices and from games. That’s really going to make us a really good team.”

In the 12 Sun Belt Conference Tournaments since 2001, WKU or North Texas has reached the championship game 10 times.

WKU has won five titles in that span and North Texas two. But Tuesday’s meeting will be the first meeting between the two in the championship game.

A win would mark WKU’s 22nd appearance in the NCAA Tournament.

To do so, the No. 7 seed Toppers will have to stop Sun Belt Freshman of the Year Tony Mitchell, who’s averaging 14.6 points points per game.

Chris Jones and Jordan Williams — two of North Texas’ top two guards — were dismissed from the team in mid-January. Still, Harper knows how tough of a matchup it will be.

“I don’t know how we can beat them. We’ll have to go figure out something,” he said. “I know our kids are going to show up and compete and play awfully hard. Happy to be playing in the championship game tomorrow night.”

Harper is WKU’s biggest believer. Not once has the surging head coach doubted his young team.

And as he addressed the media following his team’s third straight Sun Belt Tournament win — his fifth in a row since having the interim tag removed — he talked about a team that’s as focused as its been all season and playing its best basketball.

“Obviously we felt when we left Bowling Green that we were playing our best basketball of the year,” he said. “I know we talked about how we’re going down (to Hot Springs) to win a championship. Our kids believe now.

“I knew when we left Diddle Arena that I had a basketball team that was focused on the task at hand. We were on a business trip. We were so good in practice this week, it was scary. I have not seen us this good… I felt like we had a chance coming in here and that’s about all you can ask this time of year.”