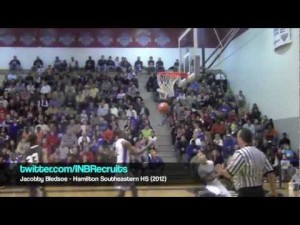 Now he may get to see his son play for Harper at WKU.

Jacobby Bledsoe, a Class of 2012 point guard out of Hamilton Southeastern High School (Ind.), has narrowed his college decision down to two schools, WKU and Northern Illinois.

“I’ve had a long relationship with (NIU Head Coach) Mark Montgomery since I was younger,” Jacobby Bledsoe said. “But I really like the atmosphere at WKU and Coach Harper.”

He said he hasn’t scheduled an official visit to either school yet, but he’s talked to WKU staff about arranging a visit now that his high school season has ended.

The younger Bledsoe puts a lot of trust in the elder’s opinion. His father Sean spent years coaching college basketball, including stops as an assistant at Bowling Green State and Cleveland State.

“My dad loves Coach Harper’s style, back to his head coaching days at his other schools,” he said. “He’s intense, but you can tell the guys like him a lot.”

Before narrowing his decision, Bledsoe also had offers from Oregon State, Dayton and Drake, among others, according to Rivals.com.

He said his biggest strength as a player is his ability and willingness to make plays for his teammates, similar to NBA guards Tony Parker and Jason Kidd.

The 5-foot-9 guard said he can also make open shots when he needs to, saying he shot 42 percent from three point range his senior year.

“My dad has always told me that I have to make plays for others, that’s what those guys do,” Bledsoe said. “I love getting out in transition for a chance to get us layups or dunks.”

He said he played football and baseball up until eighth grade, but gave those up to focus on high school and AAU basketball.

Bledsoe enjoyed a formidable backcourt at both Hamilton Southeastern HS and with his AAU team (D3 Heat), playing alongside the No. 3 shooting guard in the nation according to Rivals, Michigan State signee Gary Harris.

Now that their high school season is over, he currently has no set date to make his final decision between WKU and NIU.