Toppers use four-run second on the way to win 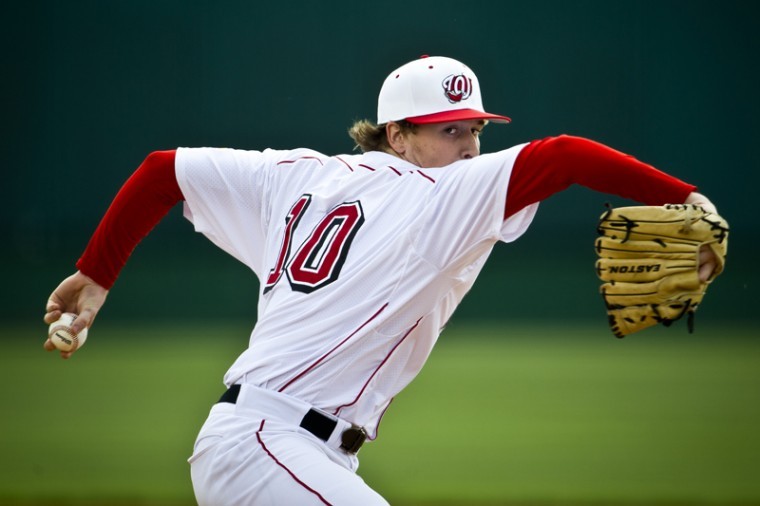 WKU hadn’t led at any point during the first two games of its series against Florida International.

The Toppers had come back to tie it up on four separate occasions but never could punch through to gain an edge.

Head Coach Matt Myers said getting a lead and maintaining it was huge in salvaging the series finale.

“When we can get the lead early we play better,” Myers said. “That was big today after losing the first two.”

The Toppers got it started in the top of the second inning when the first three batters reached base to load the bases.

A wild pitch by FIU starting left-hander R.J. Fondon allowed a run score to give WKU a 1-0 lead and advanced runners to second and third base.

Junior catcher Devin Kelly proceeded to hit a two-RBI single that made it a 3-0 WKU advantage.

The Toppers would add one more run on an RBI groundout by senior center fielder Jared Andreoli to take a 4-0 lead after two innings.

WKU would expand its lead to 6-0 in the bottom of the fourth inning on back-to-back RBI extra-base hits by Andreoli and senior right fielder Ryan Hutchison.

Myers said those type of innings are simply “backbreakers” for the opponent.

Freshman left-hander Ian Tompkins started on the mound for WKU and posted zeros on the scoreboard through the first four frames.

Tompkins said it was important that the offense got off to a quick start so that he could “take a breath.”

“It makes my job easier,” Tompkins said. “I can actually get a breath, collect myself and just go out there and execute. It’s a load off the mind.”

However Tompkins ran into trouble in the top of the fifth inning and allowed three earned runs to score that cut WKU’s lead to 6-3.

Freshman right-hander Brennan Pearson came in to pitch for the Toppers and cleaned up the fifth inning. Tompkins finished his start having gone 4 1/3 innings while allowing three runs on four hits and six walks but also recording six strikeouts.

Just when it appeared the Panthers were closing in on the lead, WKU got a big hit from senior third baseman Casey Dykes in the bottom of the sixth inning.

With the bases loaded and one out Dykes ripped a bases-clearing double to left-center field that put the Toppers up 9-3.

Dykes said he was just wanting to come through in an opportunity with runners in scoring position – something they have struggled with lately.

“Something we’ve been working on is not sitting on a lead,” Dykes said. “We’ve been struggling with runners in scoring position as of late but I was just thankful to get that opportunity and come through for the team.”

Dykes’ hit expanded WKU’s lead enough to provide a comfortable margin that the Panthers wouldn’t be able to threaten.

FIU tacked on a run in the top of the eighth inning but ultimately fell to the Toppers 9-4.

WKU avoided the series sweep at home and exits the weekend with a 2-4 record in Sun Belt play.

Before getting back to conference play the Toppers head to Lexington on Tuesday to take on Kentucky (24-1).

Although Myers said they’ll use a pitcher-by-committee system, sophomore left-hander Austin Clay will likely get the nod to start on the mound.