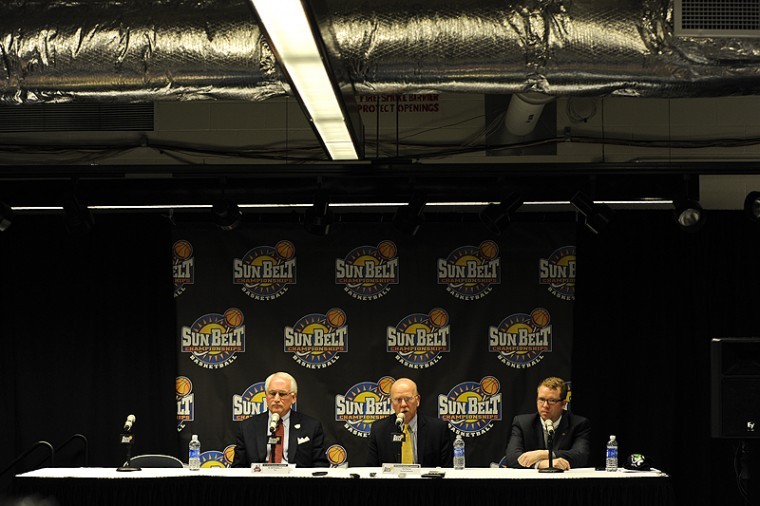 But Benson was on hand for his first ever Sun Belt Basketball Tournament and talked about his visions for the conference, which include helping it get back to being a multiple bid league for the NCAA Tournament.

That process would start right away if he had it his way. He was originally supposed to start his tenure with the Sun Belt on April 1, but said he’s trying to expedite that March 15.

“The sooner that I can sever ties with the WAC and devote all my attention, all my energy and all my corporate duty to the Sun Belt, would be in the best interest of both the Sun Belt and the WAC,” he said.

Benson, 60, was hired after 18 years with the WAC. Conference realignment tides began to turn over the past decade and the WAC became a haven for change.

With much of the talk around conference realignment involving football, Benson talked about the state of basketball in the Sun Belt, saying he “can’t lose sight of how big basketball is.”

“The Sun Belt needs to get back into that multiple bid level. There’s a lot of money involved and it’s growing. We need to take advantage of that.”

The Sun Belt hasn’t had multiple teams in the NCAA Tournament since 2008 when WKU and South Alabama made it, and WKU’s first round win over Illinois in 2009 was the last NCAA Tournament win for a Sun Belt school.

The conversation shifted back to football and the general state of the conference, which Benson said is particularly strong right now.

After dealing with change in the WAC, he said the Sun Belt’s stability appealed to him.

“Of the 11 BCS conferences, the Sun Belt is the only conference in the last year that has not had any change,” he said. “Every other conference has had some change. The stability of the Sun Belt was something that was very interesting to me — the ability to grow a conference and not have to deal with, perhaps, changes.

“However, if there are changes, the other thing that was appealing was the number of schools that are in the Sun Belt footprint that are possible new members of the Sun Belt.”

Benson said there’s “always going to be threats” of schools leaving the conference, but added he likes the position the Sun Belt is in.

“I don’t think anything’s imminent,” he said. “I think the fact that whether it’s a North Texas or Florida International or Florida Atlantic or Troy or Western Kentucky or any that are being mentioned, it’s a compliment to the growth that these institutions have had.

“I certainly see a number of institutions that have gotten better under the WAC umbrella that have moved on. I don’t think there’s anything necessarily wrong with that. I’ve always said, when teams join the WAC, they get better. Well, when teams join the Sun Belt, they’re going to get better. They’re going to take advantage of all the assets and all of the resources that a conference has.”