Lady Toppers get chance to avenge 2011 losses to USA 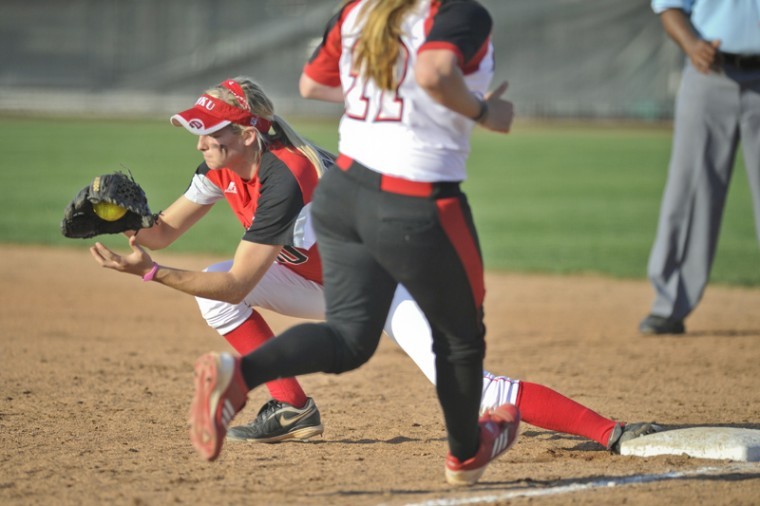 Junior infielder Mallorie Sulaski makes an out at first base during the game against Louisville on Wednesday afternoon at the WKU Softball Field. Sulaski made 10 outs during the game. WKU lost 6-0.

It’s been almost a year since WKU played South Alabama, but the Lady Toppers are still bothered by how they played in their last meetings.

WKU (18-8, 3-0 Sun Belt Conference) was swept in its three-game set against the Lady Jaguars last year. All three games were ended by the mercy rule, with WKU losing by a combined score of 36-4 over the course of the weekend series.

Junior outfielder Katrina Metoyer still hasn’t forgotten those games and is hoping the upcoming match ups against South Alabama (15-6, 3-0) on Saturday and Sunday can provide some redemption.

First pitch is at 1 p.m. Saturday at the WKU Softball Complex.

“We want to beat South Alabama so bad,” she said. “After last year they have it coming from us.”

In last year’s series, the Lady Toppers were only able to scratch out 11 hits, with seven of those hits coming in the series finale.

“The girls were a lot quicker than we anticipated and they dropped a lot of bunts down that we didn’t field very well,” she said. “They got decent hits and strung them together.”

Players and coaches have had positive things to say about the adjustments made to the infield defense this season. But WKU will have to play strong defense overall as they face a South Alabama team that has five regular starters who are hitting above .300 on the season.

One of their strongest hitters, freshman Alyssa Linn, is batting .381 with nine RBI and five stolen bases. Junior outfielder Brittany Fowler is also making strong contributions for the team as she leads the team in RBI with 16 to go along with a .344 batting average.

The South Alabama offense is impressive, but Head Coach Tyra Perry said she’s more focused on what her batters will do against South Alabama’s pitching staff.

“They have a big lefty so we’re going to talk about keeping our hands inside the ball and going with the pitch,” she said.

The big lefty that Perry was referring to is Hannah Campbell, who has pitched 78.1 innings and has an ERA of 2.41 with a record of 8-5.

Coming off of a disappointing loss to Louisville in which they were shut out 6-0, Perry said she wants to take the next two days as an opportunity to refocus the team and reinforce their offensive game plan.

Perry also expressed confidence that her batters could perform against anyone — whether they were left-handed or not.

Metoyer said this weekend will be a big chance for the Lady Toppers to defeat a team that gave them so much trouble a year ago.

“I think we’re just ready for some revenge,” she said.