EDITORIAL: In the trash: WKU should inform students about social media policy change 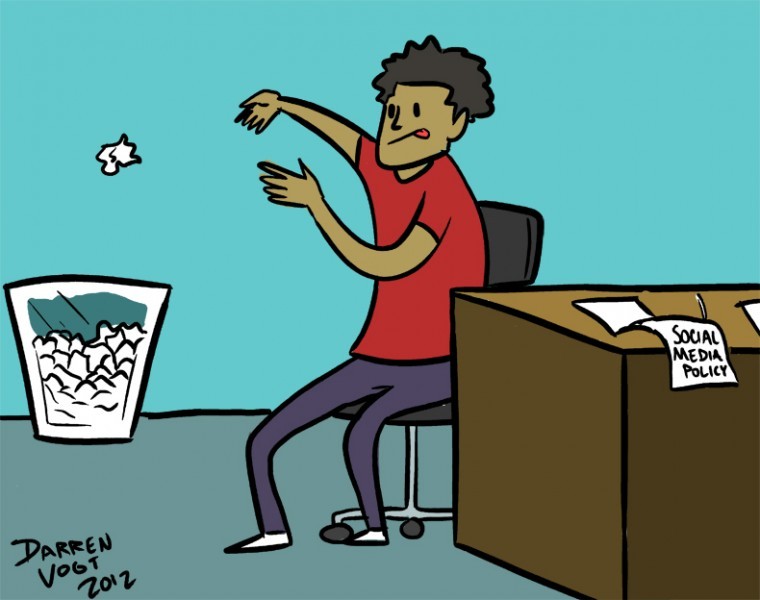 The ISSUE: After backlash from students at WKU and national news outlets picking up on the story, WKU has changed its social media policy, a policy that infringed on First Amendment rights.

OUR STANCE: The Herald believes it’s  the university’s responsibility to change the Student Handbook’s social media policy, but the way they announced it -— at a small forum — could have been done in a better way. In the future, WKU administrators should be more transparent.

More than a month ago, news broke about WKU’s unconstitutional social media policy. The policy allowed the university to punish students who posted comments online that the university deemed “inappropriate.”

Upon the Herald’s reporting of the issue, the news was picked up by national media outlets such as the Washington Post and the Huffington Post. Baylor University’s student newspaper, The Baylor Lariat, also wrote a staff editorial on the policy. Two weeks ago, the American Civil Liberties Union filed an open records request hoping to look into any violations on WKU’s part.

What WKU was trying to prevent in the first place with their former social media policy had backfired against them: They now faced criticism and reports from national news outlets and students alike.

WKU decided to listen to the response and made a change.

WKU said at a forum hosted by the Institute for Citizenship and Social Responsibility last Tuesday about free speech that WKU had removed their former social media policy. A new policy was posted online on Thursday.

While the Herald thinks it’s great that WKU changed its policy, we don’t agree with the way it was announced or with the questions that are still left unanswered.

It appears that the university literally tried to slip in the policy change without letting anyone know.

After all the turmoil the original policy caused, one would assume the administration would have done a better job of letting the students become aware of the change. Instead, it appears the university tried to save face and slip in the new rule change.

Simply put, if WKU administrators are going to change the rules, they need to notify the students.

A forum is not a fair way to make an announcement for a policy that had become so widespread.

WKU took the Student Handbook off the website Tuesday and replaced it Thursday with the edited version.

WKU students still aren’t clear on the process of changing the handbook, and administrators have decided to stay silent. In fact, we still don’t know their reasoning for wanting to change the policy.

Whether WKU wants to admit it or not, the public and student response to their social media policy played a role in changing the policy.

This is the second time WKU has retracted their original stance on a controversial policy because of public reaction.

The first was when football defensive coordinator Lance Guidry was arrested for a DWI last November. After public urging to release details of his punishment, including threats from donors to stop giving money, the university decided to release details.

While it is great that WKU ultimately changed its stance, it always seems to take a firestorm or backlash for it to be done.

It would save a lot of time and energy if WKU would just admit it is wrong to begin with, or, better yet, do what is right in the first place.