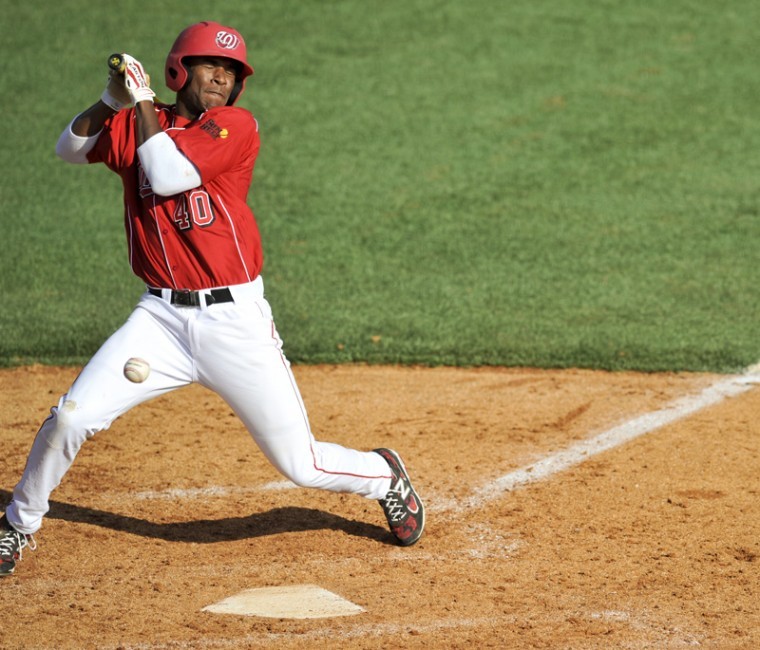 WKU Sophomore David Simmons is hit by a pitch during WKU's 13-1 win over Butler Tuesday afternoon at Nick Denes Field.

WKU finally got the kind of offensive production it had been looking for on Tuesday.

Coming up empty with runners in scoring position and failing to produce two-out hits had become a thorn in the side of the Toppers as of late.

Junior left fielder Adam Lavelle said the team simply “bought in” coming off an 11-1 loss to Western Illinois on Sunday in which they stranded 15 base-runners.

“We had quality at-bats,” Lavelle said. “We got guys in scoring position and finally drove them in.”

“The biggest thing that we did differently today is we took advantage of the early strike,” Myers said. “We didn’t let it get to two strikes and that’s usually the best pitch you’re going to get.”

The Toppers jumped on the board early by scoring three runs in each of the first and second innings to put the Bulldogs in a hole.

WKU’s first four batters reached base and Lavelle’s single to left-center field plated two runs to give the Toppers a 3-0 lead.

WKU threatened again in the second inning by getting runners to first and second base with just one out.

Back-to-back singles and a fielder’s choice scored three more runs to put the Toppers in a comfortable 6-0 position.

Myers said it was huge to jump on the Bulldogs early.

“For the offense to go out with two crooked innings back-to-back allowed them to have some reward for what they’re were doing,” Myers said. “They could finally take a breath.”

The Toppers continued pouring on runs in the ensuing innings and WKU’s pitching staff held Butler to a lone run.

Lavelle had singles with runners in scoring position in each of the fourth and fifth innings to plate a total of three runs for WKU. He finished the game with six RBIs in a 3-for-4 effort.

WKU used a four-run fifth inning to create a comfortable 11-1 lead that was too unbearable for the Bulldogs.

Myers said it’s important for the team to get back to having fun as they did on Tuesday.

“They’ve been so good when they’re just loose,” Myers said. “They’ve been tight because they don’t want to make mistakes but you can’t go through life playing baseball that way.”

The Toppers will face a big test when they open up Sun Belt Conference play against Middle Tennessee this weekend starting on Friday in Murfreesboro, Tenn.