Q is for Queen: Student discovers passion through dressing in drag 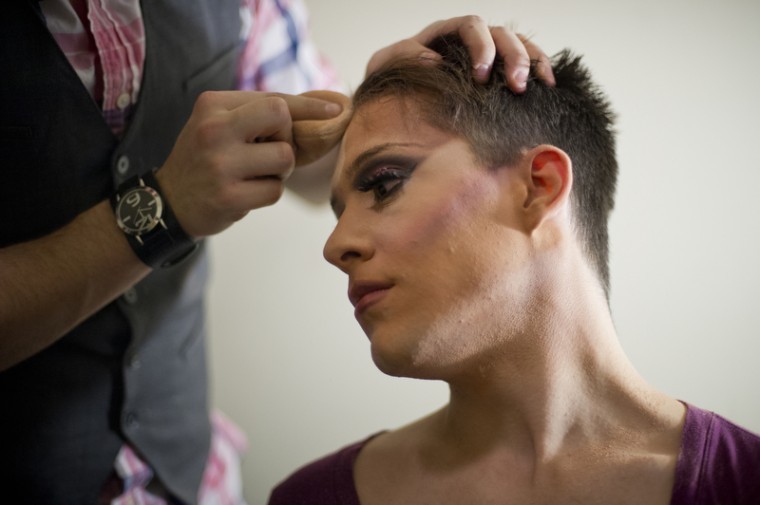 Dustin Dennis, 20, of Bowling Green, also known as Skylar Marie, gets help with his make-up from his boyfriend, James OÕNeal. Both Dennis and OÕNeal perform as drag queens. Dennis got his start this past July and said some people are accepting of it. ÒCampus is accepting, but outside of it is not,Ó he said.

Walking on campus, many WKU students might pass a drag queen and not even suspect it.

But their classmate, Owensboro sophomore George Morgan has an alter ego by the name of Gabriella Divine, the Princess of the Stars.

“I feel beautiful when I’m in drag,” Morgan said. “She can bring something beautiful into the world that I could not do on my own.”

Transforming into drag involves dressing as a different gender, wearing overly exaggerated makeup and elaborate outfits — often with feathers and sequins — and lip-synching and dancing to popular songs.

On Friday, Morgan is performing for the first time as Gabriella Divine at The Hookah Café in Owensboro. He will serve as a special guest for a 21st birthday party.

“I’ve only dressed in drag for themed parties and events,” Morgan said. “I’m just really excited to be able to perform as Gabriella.”

The name Gabriella Divine came from Morgan’s fascination with the archangel Gabriel, while the Princess of the Stars came as a subtitle because he wants his alter ego to be famous.

He also looks to famous drag queen performers like JuJuBee, RuPaul, Raja and Raven for inspiration.

“They are such an influence in the drag community,” Morgan said. “I think (all drag performers) look to them to see what they did to make it so big.”

Ellis Place, 700 State St., hosts an event once a month where the local five-member cast performs with one or two other special guests.

Dustin Dennis — also known as Skylar Marie — is a member of the cast. He said the crowd is his favorite part of Ellis Place.

“I cannot sing at all, but music is my life, so being able to express myself through people like Whitney Houston and artists of the top 40 is my way of channeling my musical skill,” Dennis said.

Morgan said he is not ready to audition for Ellis Place or compete in pageants just yet.

“I want to master my skill before I go any further into this,” he said.

Morgan’s hometown best friend, Courtney Lively, is his drag assistant. She helps him get ready for the night and helps promote him through his Facebook page and word of mouth.

Morgan said it requires a lot of friends’ support to get into drag. Glasgow sophomore Eb Mckinney is among those friends.

He also said the only support he fears he won’t receive is from his parents, whom he hasn’t told yet about his passion.

“Courtney and Eb have been my biggest supporters throughout this whole thing,” Morgan said. “They’ve made me feel comfortable in my second skin.”

Profits from shows go right back into the craft, Morgan said.

“In a circumstance like (Morgan’s), you would think he would back down from such difficulty, but instead he uses that challenge to inspire and power his creativity,” Mckinney said.

To make the lifestyle is more cost-efficient, Morgan and Dennis both make their own outfits. Morgan said constructing the costume is more unique and saves money.

“Drag is all about expressing yourself from the inside,” Morgan said. “It’s making people see beauty from a different view of yourself.”