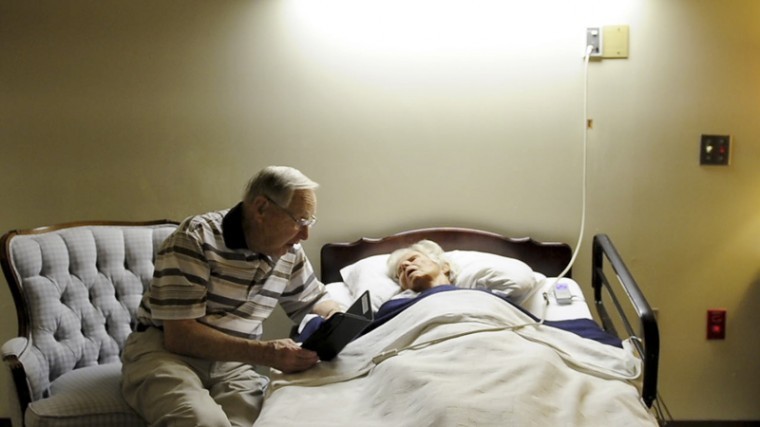 Robert Mounce reads to his wife, Jean, in her room at Village Manor, a nursing home in Bowling Green.

He’s piloted a dive bomber in the Naval Air Corps, developed a radio station in Guatemala, worked at three universities, led sermons in California and been a husband for almost 60 years.

At 90 years old, Robert Mounce said he believes, “in a sense, the best life is a life invested in someone else.”

After coming to WKU in 1967 on a Danforth grant to establish a department of religion, Mounce went on to become the Dean of Arts and Humanities, now recognized as Potter College of Arts and Letters.

Thomas Weakley, part-time faculty of leadership studies, is the director of Campus Crusade for Christ (CRU).

Weakley said he met Mounce in college and remained familiar with the name because his wife had Mounce for a New Testament class when she attended WKU.

Mounce currently lives in a Bowling Green apartment that is a part of the same complex as the nursing center where his wife, Jean Mounce, resides.

On Thursday, Weakley will present a message at the weekly CRU meeting on marriage and dating. While speaking to the students, Weakley will incorporate a video of Mounce and his wife that focuses on love and care.

“I will be speaking on marriage and dating and will be using the video as an illustration,” Weakley said. “(Mounce) will be speaking for us, but not this week. It will be after spring break.”

In the video, Mounce said marriage has a way of getting better.

“Our love for one another has deepened and as a result has been much more rewarding to both of us,” Mounce said. “Love that is nurtured with selflessness grows.”

Weakley said his message will focus on the qualities needed to have a long-lasting relationship.

“The example we need to look to is Mounce,” Weakley said.

No one is perfect, and Mounce said he believes that

instead of thriving for perfection in a relationship, a couple should instead develop an authentic openness to ensure they do their best to make perfection a reality.

Imperfection struck Mounce’s relationship when his wife’s health began failing. Two years ago, he moved her to a Bowling Green health center where he could get additional help in caring for her.

“That’s what love is – placing the welfare of the other ahead of your own,” Mounce said.

After Weakley shows the video this Thursday, Mounce said he hopes the students will recognize that placing the welfare of the other ahead of your own results in greater happiness for both involved.

Weakley said he feels that in today’s society, many young people focus on the preparation involved in the wedding ceremony when they should be preparing for a lifetime of marriage.

“Look for qualities you admire in the people you hold in high esteem,” Mounce said. “Recognize that marriage is a lifelong relationship that is intended to grow and become increasingly rewarding.”