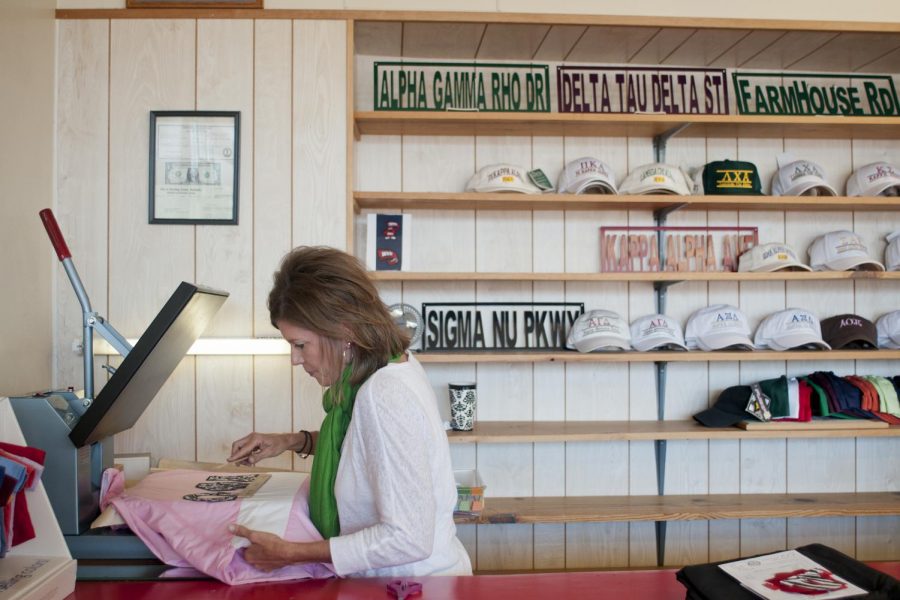 Patty Gay presses Greek letters onto the back of a jacket in her motherÕs store, College Graffiti. Gay graduated from WKU in 1990 and was an Alpha Omicron Pi.

College Graffiti, a local apparel and gift store, is celebrating its 25th year of business in August.

Owner Diane Signorello said the business began when she went to the Greek houses for trunk shows and sales.

“My daughters were AOPis, and they couldn’t find any Greek products except in a shoebox at the bookstore,” she said.

So Signorello got a certificate, licensure and started at home.

She opened a store in 1991, and now College Graffiti is a popular place for customized products.

“We are a collegiate Greek store catering to the Greek community at WKU and other universities in Kentucky, Indiana and Tennessee,” she said, adding that people come from everywhere.

“I have friends back home who come up here because they don’t have a store like this,” she said.

The store is not just for Greeks either.  Signorello said they are also licensed to create WKU items, as well as personalized items for other organizations including cheer teams and the nursing program.

As far as the items College Graffiti personalizes, the owner said they have several options, such as T-shirts, sweatshirts, shorts, hats, flip-flops and more.

“It’s hard staying on top of trends, but we make sure we have what people want,” she said.

“We started with Lilly (Pulitzer) sorority patterns this semester and have new quarter-zips, razorback tanks and neon tanks — all the spring break must-haves.”

Signorello said that customer service is a priority for her and her two daughters that also work there.

“We have a good quality product at a good price, and we are consistent at what we do,” she said. “There is no job too small.”

Not only does Signorello interact with her customers, but also with the whole Greek community. She said they donate to the various philanthropies and help with sponsorships.

“They donated to our golf scramble,” Burnett said.

Above all, Signorello said her favorite part of running a business is the clientele.

“They’re my students, and I care about them,” she said.

She did note many of the customers are girls and that they were “a little on the light side with the fellas.”

But Louisville junior and Phi Gamma Delta member Chris Kinney is one male who’s shopped there. He said he bought a T-shirt from the store and also likes to purchase gifts there for his little brother. Though he said he goes only about once or twice a year,  Kinney said he really does like the variety of items they offer.

“You don’t want something everyone else has,” he said. “You want to make it personal, unique.”

Signorello added that the store now has an online service to make it easier for the customers. You can visit their website at www.college-graffiti.com.