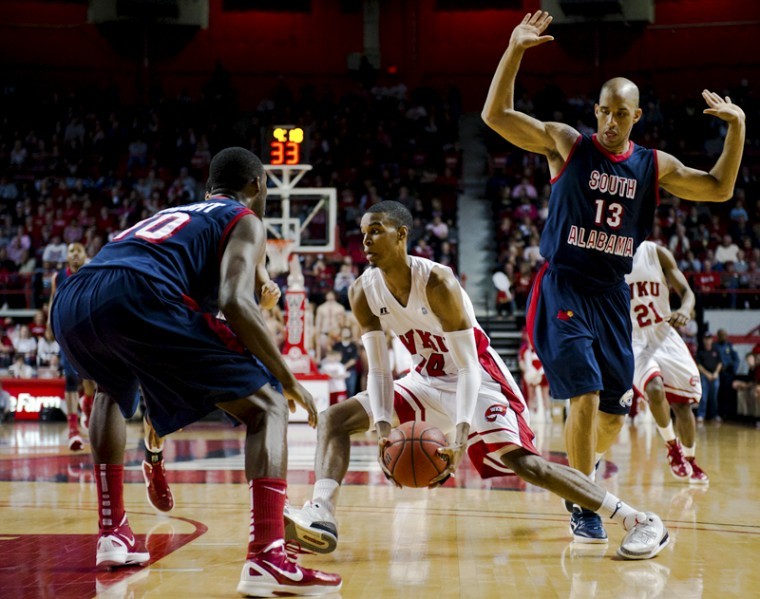 On the stat sheet, he was doing much more.

The point guard previously known only for his game management and passing skills torched the nets for a career-high 24 points on 9-of-10 shooting on Saturday night to lead WKU (8-15, 4-6 Sun Belt Conference) to a 75-66 home win in front of 6,407 fans — the largest home crowd for a Topper game this season.

“I was just taking what they was giving me and I made the best of it,” Crook said.

Crook did more than just score, though.

He dished out six assists, had two steals and pulled down two rebounds.

Interim Head Coach Ray Harper read Crook’s stat line off after the game and shook his head, perhaps in astonishment.

“I told him he played like the best point guard in this conference tonight,” Harper said. “He is our leader right now, no question. That’s why we’re playing like we are right now.”

Crook hit a 17-footer with seconds remaining in the first half to make it a 35-35 game at halftime.

Right out of the gate in the second half, freshman guard T.J. Price hit a three-pointer to give WKU a 38-35 lead. The Toppers never trailed the rest of the way.

South Alabama tried to make a couple of comebacks, cutting the lead to six points twice in the final 10 minutes.

WKU led by as many as 14 late in the second half.

The first half featured four ties and seven lead changes after both teams went into halftime tied at 35.

WKU started to pick up momentum with just under seven minutes to play when leading scorer Derrick Gordon dove for a loose ball and ended up flying over the scorers table.

Gordon hit his chest hard on the steel bleacher aisles and stayed down for about two minutes. With the help of trainers, he got up and headed to the bench to a standing ovation and the crowd chanting his name.

Crook said he thought Gordon would just get up right away, but when he didn’t he started to get worried.

Gordon checked back in about two minutes later and right away blocked a shot. He finished with just four points in 33 minutes.

Akol’s five rebounds helped WKU out-rebound the Jaguars 33-30. South Alabama had not been out-rebounded since November until Saturday.
“Our goal was the whole game to come out there and out-rebound them,” freshman forward George Fant said. “I think we out-rebounded them by three so I think that was the key to the game.”
WKU also put together one of its better shooting performances of the season. The Toppers finished 54.7 percent from the field, shooting 56 percent in the second half.
They were 43 percent from three-point range, including three made three-pointers from Price.
“I told you guys, they’re going to start falling. They just needed some confidence,” Harper said. “I think you witnessed that a little bit tonight. I know they’re going to get better.”
While the Toppers put together one of their best performances this season, the night was also about Harper. Saturday’s crowd was the ninth largest at Diddle Arena in the last five seasons.
Fans came armed with carboard cut outs of Harper’s face to wave around as well.
As the game neared its end, the crowd chanted “We want Harper,” perhaps voicing their public vote as to who they’d like to see be the next official head coach of WKU.
“Oh wow. This is the crowd I remember,” said Harper, who grew up in Muhlenburg County and watched Topper games in Diddle Arena growing up. “This is our house and that’s how we’re going to attack it each and every time we come to Diddle Arena. We’re not losing games at home.
“Our fans were the sixth man tonight. I can’t thank them enough. Our kids can’t thank them enough.”
Harper laughed when asked what he thought when he first saw the cardboard cut-outs of his face.
“Somebody’s going to be hanging those out in their garden somewhere to keep the birds or whatever away,” he said. “But again, I appreciate all the support I’ve gotten from students, the entire community. That’s what WKU basketball is all about.”
Delete Image
Align Left
Align Center
Align Right
Align Left
Align Center
Delete Heading