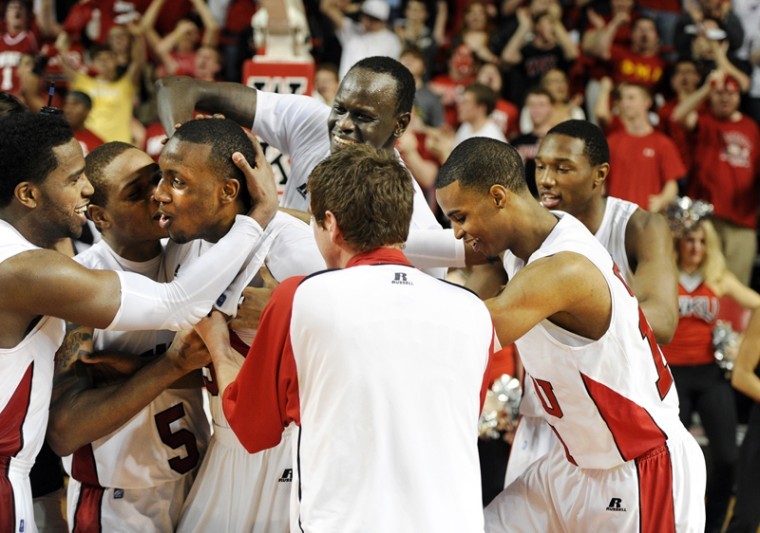 Freshman guard T.J. Price is congratulated by his teammates after making the game-winning shot Thursday night against Arkansas State in Diddle Arena. Price knocked down a 3-pointer with 2.9 seconds left to give WKU a 79-76 victory.

It might not have gone down like Head Coach Ray Harper planned, but a big shot from freshman guard T.J. Price with 2.9 seconds remaining gave the coach his first win since officially being named WKU’s head coach.

“That’s how we drew it up when I brought those guys over,” Harper joked after the game. “‘Derrick, you’re going to get trapped right here at mid-court and act like you’re going to throw it away and Kahlil, you pass it or shoot it,’ and that’s what he did… You don’t really believe that do you?”

Freshman guard Derrick Gordon took the inbounds pass and was trapped at mid-court with time running out. He passed the ball to McDonald, who took it under the rim before passing it to Price for the game-winner.

Price gave credit for the game-winner to McDonald.

“I had no choice but to knock it down,” he said. “He could have easily drove it, got the lay-up, but we played unselfish tonight and made the extra pass.”

Fant said he could see the shot going in before the play even happened.

“I knew it was good before it left his hand,” he said. “I didn’t even have to look for long, I knew it was money.”

Price’s late three made up for what was a sloppy night for the Toppers under the basket. WKU was out rebounded 39 to 17 and pulled in only three offensive rebounds all night.

Head Coach Ray Harper, in his first game since officially being named the WKU’s head coach, was quick to point out the rebounding margin as something his team has to improve on.

“We must get that corrected because we’re not going to continue to win games if we don’t rebound the ball,” he said.

The game was close all night. No team lead by more than six points at any time and there were a total of 15 ties and 16 lead changes throughout the game.

The Toppers led 76-72 with less than 30 seconds to go before Arkansas State was able to tie the game with 17 seconds to go after four quick foul shots.

Harper said winning a close game like this one should help the team grow.

“I think it’s just good for our guys to win one like that,” he said. “We’ve been right there at the edge and we’ve lost some tough ones on people making shots on us at the buzzer. It was right there at our grasp and we were trying to let it slip away. We didn’t do it.”

The Toppers had four players score in double-digits, with Gordon posting 16, Akol with 14, McDonald with 14, and Fant leading WKU with 19 points.

WKU shot the ball well all night. The Toppers finished with a 56.5 percent shooting percentage and hit 6-of-17 3-pointers.

WKU also benefitted from moving the ball around. The Toppers had 17 assists on the night, 10 more than ASU, including six from Gordon.

No assist was bigger than McDonald’s to Price for the game-winner.

The Toppers will have to get back to work quickly. WKU closes out the regular season in Diddle Arena against Middle Tennessee State on Saturday.

The Blue Raiders are at the top of the Sun Belt Conference and have clinched the number one seed in the upcoming Sun Belt Tournament.

Harper said the Toppers will have to improve on the boards before then if WKU is to have any shot at beating MTSU, which he called the “toughest team in the league.”

“If we do not do a better job at 5:00 on Saturday of rebounding the basketball, we’re in trouble. It’s that simple,” he said. “If they come in here and outrebound us 39 to 17, we do not beat Middle Tennessee.”

Still, Harper said he thinks the Toppers will come out swinging on Saturday.

“We’ve got about less than 48 hours to get that corrected, but I guarantee our guys will be ready to play,” he said.

McDonald, the only graduating senior on the team, said the only thing on his mind is getting the win over MTSU — not celebrating Senior Night.

“I’m just going to treat it like today’s game — go hard as possible and just come up with that ‘W’, that’s the main thing on my mind,” McDonald said. “I ain’t worried about Senior Night, to be honest with you, I just want to win.”