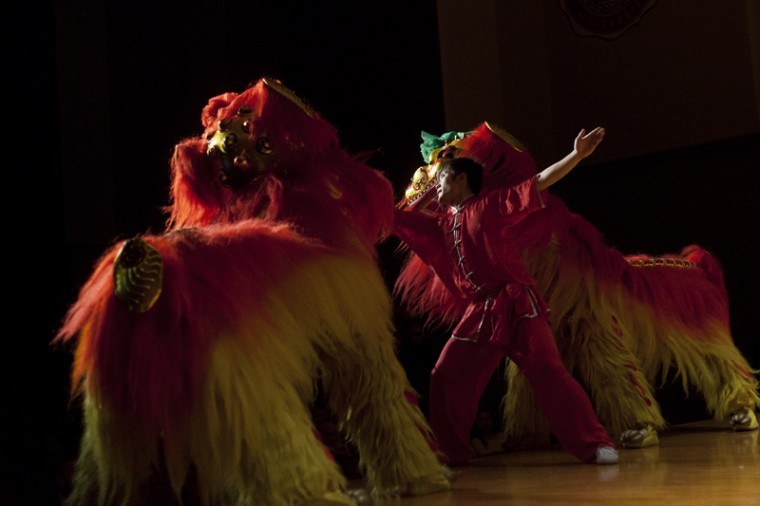 WKU’s Confucius Institute partnered with Hubei University in China to present the gala to nearly 400 students, parents and community members in celebration of the Chinese New Year.

The event took place in the Downing University Center Auditorium, beginning at 6 p.m. and lasting until 7:30 p.m. Refreshments followed after the performance in DUC’s Coupola Room, where students could meet Hubei’s performance team, as well as Chinese administrators from Hubei.

President Gary Ransdell opened the gala, thanking the Chinese education ministry, the Hanban, and recognizing nine of WKU’s Chinese language partner schools represented at the gala. He also wished those in attendance a happy and prosperous Chinese New Year.

“What a prosperous opportunity we have to witness our friends from Hubei University,” Ransdell said.

After the dragon dance, various Hubei groups displayed different aspects of Chinese culture. Tai Chi fan dances, calligraphy, traditional music and a tea ceremony were all displayed by the groups.

Hubei’s final performance was a traditional lion dance, which represented the strength and vitality of the Chinese people. A mixture of puppetry and acrobatics, the performers leapt and tumbled around the stage dressed in two bright yellow lion suits.

Martin said the event was “definitely a success.”

“All of the schools that we invited showed up,” he said. “And the nine schools that participated brought in about 357 students just from those schools.”

Adairville seventh-grader Ann-Meguare Bouldin thought all of the performances were “really good.”

“My favorite one was the lion dance,” she said.

So far, Bouldin has studied Chinese language for “just this year,” but really enjoys it. Bouldin’s Chinese teacher, Angela Zhang, is one of 23 instructors sponsored by the Confucius Institute.

“I have the best students,” Zhang said. “I’m so proud of what they’ve learned. They work so hard.”

“Our main mission is to branch out into the community,” he said. “I hope this gains more recognition, not just in Warren County, but all throughout the state.”

Ransdell said he was “impressed with all of the incredible performances” and said the gala represented everything the Confucius Institute is about.

“The institute seeks to bring Chinese culture to the community and they did a tremendous job of that tonight,” he said.