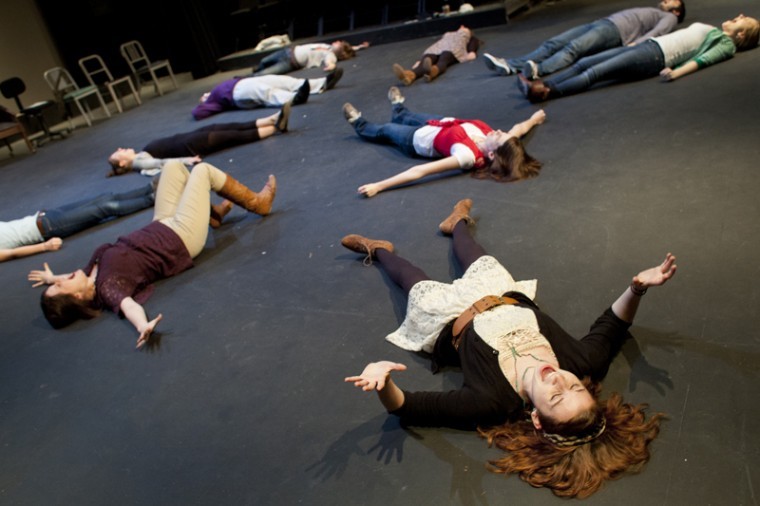 The series will feature short plays directed by WKU students, the first of which will be presented early next week.

Louisville senior Kelsey Thompson, the director of “Women and Wallace,” by Jonathan Marc Sherman, is directing her first show in the Studio Series.

Thompson said she stumbled upon “Women and Wallace” when she was looking for a monologue to audition for another show.

She said she remembers liking the play and wanting to direct the show for this particular series because of the small cast and minimal set and lighting requirements.

The play, which focuses on one boy’s relationship with the women in his life, features an all-female cast, save the actor who plays Wallace.

Isaac Middleton, a sophomore from Harlan, who portrays Wallace, said he didn’t have a hard time being the only male.

“I grew up with two sisters,” he said.

Middleton said the show provides insight into relationships from the male perspective by tackling Freudian concepts in a humorous way.

Thompson described “Women and Wallace,” as a dark comedy.

“People will find themselves laughing at times,” she said. “Then they’ll stop and ask themselves, ‘Wait! Why am I laughing?’”

“Women and Wallace” has been marketed for mature audiences.

The other show, entitled “Am I Blue,” directed by Jay Thomas, a senior from Winchester, also contains adult themes.

“It’s a good show to tackle because it is about two characters who deal with their problems,” Thomas said. “They need each other.”

Thomas, who directed “The Person I Once Was” for last spring’s Studio Series, plans to graduate in May and move to New York City to further his career in theater.

Samya Monem, a freshman from Prospect, Ky., said the play features two young adults, Ashby and John Polk, who are both unhappy with their lives and deal with their dissatisfaction in different ways — until they find one another.

“They go from feeling like outcasts to falling in love,” said Monem, who plays Ashby in the show.

Simpsonville junior Sebastian Kearney said the play is about the struggle to hold on to individualism even when it’s hard to do so.

“It’s about trying to be true to what you want,” he said. “Not just what is expected of you.”