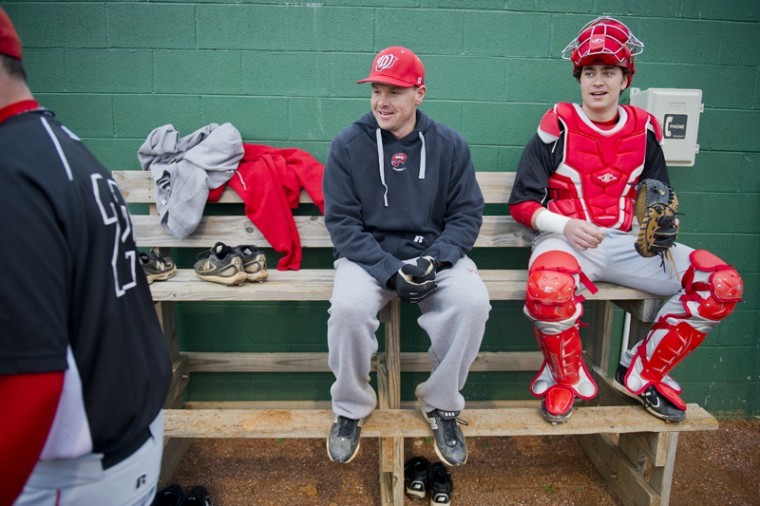 First-year Head Coach Matt Myers talks with players during practice Wednesday, Feb. 8, at Nick Denes Field. The Toppers open their season at 3 p.m. on Friday with the first game of a three-game series against Toledo at home.

WKU will begin the 2012 campaign on Friday with Matt Myers in his first season at the helm.

Myers may be a new voice to lead the Toppers, but many of his philosophies on the game will be a carryover from former head coach Chris Finwood.

He served as WKU’s pitching coach the last four seasons, taking over the head coaching duties after Finwood was hired as head coach at Old Dominion.

Finwood went 190-154 during his six-year tenure at the helm of the Toppers.

Myers said Finwood taught him “more things than you could imagine” including staying positive, even in circumstances you can’t control.

“He was a very optimistic person,” Myers said. “He made me look at the game differently from a head coaching standpoint.”

Myers has been in the head coaching position before. He served as head coach at North Carolina-Asheville for four seasons from 2001-2004, going 89-128.

But he said it was his time under Finwood that gave him a different perspective on how to enjoy the game of baseball.

“His energy, his life and his demeanor all the time made doing the job much more enjoyable,” Myers said. “I think that’s an important thing to have, and obviously he was very successful.”

In between his time at UNC Asheville, and when he took the assistant coaching job at WKU, Myers spent three seasons as an assistant at Auburn.

He said serving as an assistant at both Auburn and WKU allowed him to prepare for when the opportunity of being a head coach came back around.

“Every year as an assistant, I’ve picked up things that I add back in to my folder if I was to be a head coach again,” Myers said.

Senior third baseman Casey Dykes said the team seems to agree that in his debut season as WKU’s head coach, Myers has brought an energized atmosphere.

“Every day we go out there, the focus is on that day,” Dykes said. “There’s an energy every day that we’re bringing so that when we get to the season nobody’s going to be shocked or feel different just because we’re playing a different team.

“That’s what Coach Myers has brought to us.”

“This team is closer than it’s ever been,” Perkins said. “We have a bond as a team that will come in handy.”

Myers credited managing the clubhouse successfully to his assistants.

“A head coach is only as good as his assistant coaches,” he said. “Coaching balance is huge. Those guys make my job so much easier.”

Myers said he and his assistants have spent a lot of time planning for the duties they’ll assume this season and that he’ll call the pitches like he did as an assistant.

“Hopefully we’ve done a good job of staying organized and planned so that all of a sudden the emotions of trying to be something you’re not won’t happen just because of a title change,” Myers said.

He also said he has enjoyed the extra responsibilities that come with being a head coach, and as the beginning of the regular season nears, he’s “not nervous.”

“This is a process I’ve been preparing for since the day I was given the job, and even when Coach Finwood left, you know, knowing the potential of getting this opportunity,” Myers said. “I’m really excited about the opportunity.

“This is a dream job at a dream university, and I’d be lying to say I’m not excited to lead this program starting Friday.”