COLUMN: Bjork weds his legacy to Harper with a snapshot 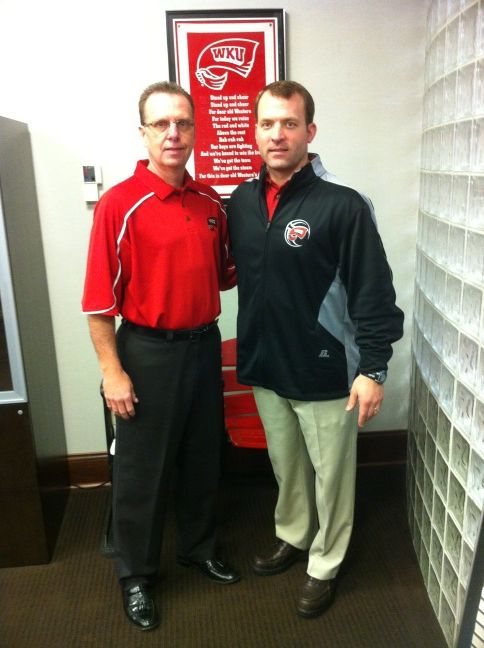 WKU Head Coach Ray Harper poses with Athletics Director Ross Bjork. Bjork posted this photo on his Twitter page as a way to announce that Harper would be named the new full-time head coach for WKU. Bjork added this message with the tweet: "#HilltopperNation welcome your new #WKU basketball coach. Congrats Coach Harper!"

A smile-for-the-camera, arm-around-the-new-coach Twitpic from the catacombs of Diddle Arena — how else would you expect Ross Bjork to announce his new men’s basketball coach?

WKU’s athletics director has become the “Twitter AD” during his two years in Bowling Green, using social media to announce attendance campaigns, stump for bowl berths and even directly communicate with fans and students.

So when it came time to announce the anticipated promotion of interim Head Coach Ray Harper to the full-time position, Bjork did what he does. He took to Twitter.

At 3 p.m. on Sunday, Bjork tweeted a picture of himself and Harper standing side by side, with the message “#HilltopperNation welcome your new #WKU basketball coach. Congrats Coach Harper!”

The hiring could’ve been announced in the same manner as former coach Ken McDonald’s firing was, with an athletic department press release.

But Bjork wanted to go above and beyond some official statements.

He wanted to show “#HilltopperNation” that Harper was his guy, and that he was going to have an arm of support around him and the rest of the Topper basketball program.

So he got out a camera (or camera phone, we’re not sure), said “cheese” and snapped a picture.

Just like that, Bjork had wedded himself to his new hire, in a way he couldn’t have through a press release.

He kept quiet about the coaching search for the last month and a half, declining to comment on or off the record about who McDonald’s replacement would be.

In the meantime, many fans fell in love with Harper, who had a revitalizing, Carter-to-Reagan effect on much of the fanbase after the doldrums of the McDonald years.

His team ran faster, played harder and for the most part looked more like a WKU basketball team than they did under McDonald.

But a lot of us wondered what else was out there.

Bjork promised a nationwide search for a new head coach, yet hired a man who’s lived most of his life within a 75-mile radius of Bowling Green.

Could he have found a young up-and-coming an assistant, like Butler found in Brad Stevens?

Could he have found a former power conference head coach looking to get back in the game, like fellow Sun Belt Conference school Florida Atlantic found in former St. John’s coach Mike Jarvis?

We’ll never know, because Bjork went with the safe, familiar choice in Harper.

That’s not to say Harper isn’t a good hire.

Anyone who’s won four championships across various levels of basketball, which Harper has done, obviously knows a thing or two about the sport.

And players love him.

To see that, search Youtube for the video from Sunday where Harper’s hiring is announced to the team, and see the bear hug junior guard Jamal Crook gave his new head coach.

The Toppers have found a guy genuinely excited to be at WKU that can both win games and connect with fans.

But whether the new coach wins big or flames out, Bjork has wedded himself to Harper with one snapshot.

Years from now, people won’t have to wonder who made the call to hire Harper, and who was responsible for his successes and failures.

They’ll just have to find the picture and look at the smiling guy standing to his left.