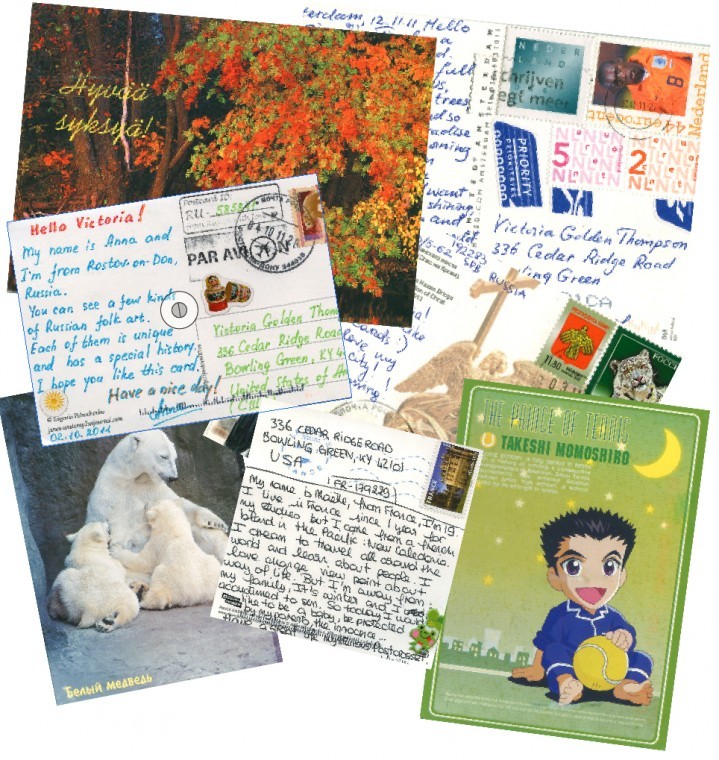 Seeing the world through your mailbox is now possible with the help of postcrossing.com.

After just two years as a Postcrossing user, WKU alumna Victoria Golden-Thompson has already sent and received approximately 35 to 40 postcards.

“I really look forward to getting the mail,” Thompson said. “It is almost like Christmas every day. They never tell you when you are going to get one.”

Postcrossing is a “postcard project,” created in 2005 by Paulo Magalhães of Portugal, intended to encourage communication between various people throughout the world, according to its website.

“It’s a way to interact with people from different countries on your own time,” Rice said. “You can make something that might not be personal, personal, simply through the fact that it’s hand-written.”

Through the website, you can create a profile stating exactly what it is you hope to gain from the experience. Thompson said her profile asks other Postcrossers to send her anything they want to ensure she doesn’t get similar postcards.

“I love to travel, and I love to go to different places,” Thompson said. “But I know I will never get to go everywhere.”

Thompson has received postcards from all over the world, including places such as China, Sweden and Scotland.

“Not only do you read about their culture and where they live, but you also read their personal stories as well,” Thompson said.

Through postcrossing.com, users request a random international or local address from the website and then mail out their postcard. Next users must wait for their postcards to be received and registered into the system. Days later, they will receive a postcard in their own mailbox.

“The address I got first was to a woman in New Zealand who has four children that make her cards for her as art projects,” Rice said. “For her, it’s family bonding, which I found inspiring.”

Once Rice’s postcard was received by the New Zealand woman and she registered it online using an assigned identification number, Rice was eligible to start receiving her own postcards.

“You get one for every one you send,” Thompson said. “I think that way the people who participate are rewarded.”

While some people may question how safe the site is, WKU alumna Jessica Vessels has been using postcrossing.com for two years now without any safety issues.

Thompson confirmed the site’s safety, by saying it is not like Facebook where everyone can see your information. Instead you first request to send a postcard in order to receive an address to send that postcard to.

While users agree postcrossing.com is more confidential than some social media sites, the postcard project does have several social media-like features, such as messaging other users, commenting on their postcards and viewing other users’ profiles.

Thompson said a woman from Germany put on her profile that she was collecting the quarters of the United States and then listed each quarter she already had.

“So I sent her about eight quarters, but I didn’t tell her they were coming, because what’s the fun in knowing they are coming?” Thompson said. “Then she sent me a message back and said, ‘That was so nice. Is there anything you want from Germany?’ and I said ‘No, I just wanted to surprise you.’”

“I have found that people who write Postcrossing postcards are friendly,” Vessels said. “They are interested in sharing information about themselves, their hometowns or their countries.”

All of this worldly exploration is not only benefitting the site’s users. According to postcrossing.com, the small fee in postage is “contributing to a more efficient postal service.”

The benefits don’t stop there either.  Thompson, Rice and Vessels agree the website gives people an opportunity to put the world into perspective. Thompson even said she thinks it would be a great classroom assignment.

“It would be nice for classrooms to do these things so that kids can get multicultural exposure to learn more about the world outside of where they’re at,” Thompson said.