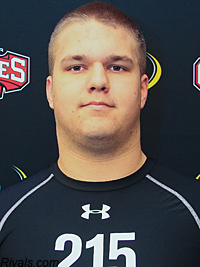 Trinity offensive lineman Tyler English is one of several players from Louisville to sign with WKU in the 2012 class. “Everybody always wants to go to U of L or UK, but if we could all go to the same school — all of us Louisville guys — that’s just a great thing,” English said. “It’s going to be a great time.”

Head Coach Willie Taggart is used to signing recruits from his home state of Florida.

That trend didn’t change with the class of 2012, as the Toppers saw six of their 13 signees fax in their letters of intent from the Sunshine State.

But the class of 2012 may also start a new recruiting trend for WKU, one that Taggart said could be a “new beginning” in the state of Kentucky.

“Everybody always wants to go to U of L or UK, but if we could all go to the same school — all of us Louisville guys — that’s just a great thing,” English said. “It’s going to be a great time.”

Taggart said having a 7-5 season in 2011 helped the coaching staff land some of the top in-state talents.

“I think everyone saw the progress of this football team within two years,” he said.

Both are already enrolled in classes at WKU.

“We’ve all come together at WKU with the mindset to make history,” said Smith, a former Louisville commit and University of Central Florida signee who is currently ineligible.

“So many people expected us to do that at U of L. We want to prove that we can do that here,” he said.

Smith said he and Moore have been friends since childhood and always talked about playing college ball together.

McMurry, who had offers from Kentucky and U of L out of high school, said he planned on transferring to U of L after prep school didn’t work out post-high school graduation.

But then he found out Smith, Moore and the others were heading to WKU.

“DaMarcus, Jerrell, and Mike (Fluellen) — we’ve all always wanted to play together,” McMurry said. “I felt this (WKU) would be a better fit for me.”

Smith said most U of L fans have been supportive of the group, although a few have criticized the players in various forums.

But Smith said he understands the passion some fans have and doesn’t take it personally.

“Sometimes with that passion can come emotion,” he said. “It’s just fans being fans. It’s bound to happen.