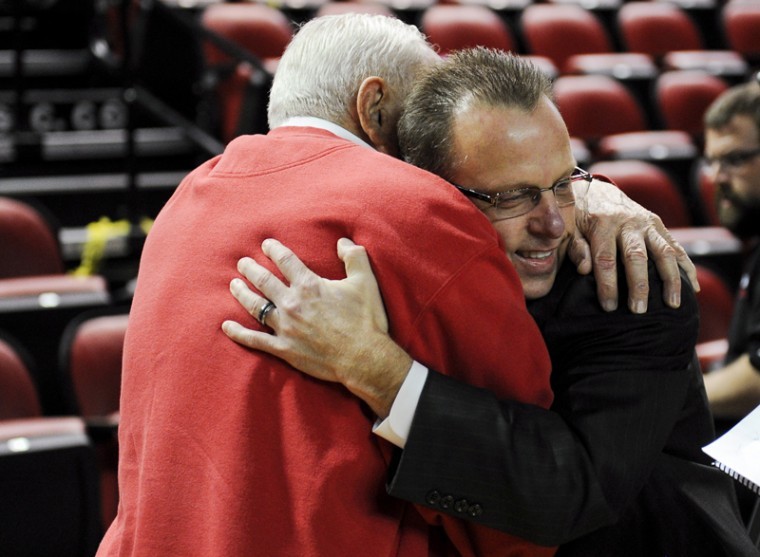 New head coach Ray Harper hugs former head coach John Oldham after a pep rally to announce Harper’s hire on Monday in Diddle Arena. After playing for both WKU and the Fort Wayne Pistons of the NBA, Oldham coached the Toppers from 1964 to 1971.

Ray Harper said not much changed for him when he was officially given the title of WKU head basketball coach on Sunday.

He joked that he woke up in the same bed and his wife still reminded him to pick up his clothes.

But he’s hoping he’ll see a change from the fanbase on Saturday for the Toppers’ game against Middle Tennessee State — one that results in Diddle Arena being full.

“I’m hoping starting (Thursday) night it will be as close to as a sellout as possible,” Harper said Wednesday. Thursday’s game against Arkansas State was played after the Herald’s print deadline. “We have two opportunities to put ‘Sold Out’ signs up. I hope we do that.

“I hope we take that and build on it in the future. This is where we’re going, get your tickets, and if you don’t, make sure you’re near a television or a radio where you can tune in because Diddle Arena is going to be rocking.”

Harper, feeling the adrenaline of the moment as he was introduced as head coach at a pep rally on Monday, billed Saturday’s 5 p.m. matchup as “Diddle vs. Middle.” This came after a dig from Athletics Director Ross Bjork who called MTSU “the blue team from the South.”

Harper’s proclamation was met with applause from the estimated 1,100 fans in attendance.

Bjork tweeted on Wednesday that ticket sales for WKU’s remaining two home games were “steady,” and unveiled pre-printed “Sold Out” signs that he hoped he could place on ticket windows.

A movement has been started on Twitter, much like during the football season, to encourage a sellout. The hashtag “#WKU7326” has been spread around by Bjork and others, signifying the maximum capacity of Diddle Arena.

Adding to Saturday’s festivities will be Senior Day, where the team’s lone senior, Kahlil McDonald, will be honored.

“Just go out there and play our game,” Fant said. “I remembered from the last time we played them, they were physical. We’ve definitely got to out-rebound them. That’s one thing we plan on doing — just go out there and get a win for Coach Harper and our senior.”

With two games this week, Harper and the players said they weren’t looking too far ahead and hadn’t thought too much about MTSU in terms of on-court preparation.

But freshman guard Derrick Gordon labeled it a “big” game heading into the Sun Belt Conference Tournament next weekend.

“They got a lot of calls down there that they shouldn’t have got, but now they’re about to come into our building,” he said. “We’ve got to be the one to throw the first punch that game. We should be able to do that.”