WKU Relay for Life kicks off with dodgeball tournament 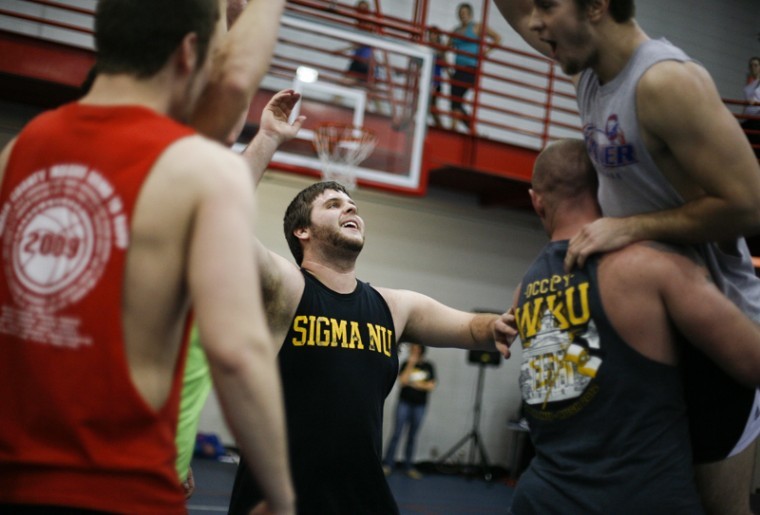 Sigma Nu Wrecking Crew celebrates during their game against Lambda Chi Alpha during WKU's Relay For Life, "Protect Your Balls" dodgeball. Lambda Chi Alpha went on to beat Sigma Nu with two wins out of three.

The Preston Center was alive and packed Tuesday night for the Relay for Life kick-off event, Protect Your Balls — A Dodgeball Tournament.

Walking into Preston, the lobby was filled with students dressed in brightly colored attire, collating into teams and registering to play dodgeball.

“Teams are made up of student groups, Greek-affiliated individuals and even people who just met five minutes ago,” Scottsville senior Craig Lonas.

Students had many reasons for coming out to participate in the tournament, but raising awareness for the Relay for Life was very prevalent among their responses.

“We wanted to support cancer research,” Glasgow sophomore Chelsea Linder said. “We’ve all been affected by cancer in some way, so we wanted to be a part of raising awareness.”

The Relay for Life is geared toward raising money for cancer research, according to their website.

“We’re getting the word out there,” Lonas said. “We’re hoping students will come have fun and play some dodgeball, so that we can recruit for our main event this spring.”

The tournament served as a free kick-off event, open to all students, for the Relay for Life main event, which takes place this April.

“People come together to take laps around a track, or in our case, a football field,” said Louisville senior Morgan Fleece, publicity chair of Relay for Life. “Last year we raised over $19,000 and for this year, so far, we have raised $2,790. By donating money people are helping fight cancer, give someone another birthday, and helping someone create more memories.”

There were a total of 20 teams in the tournament, 14 male and 6 female, said Brentwood, Tenn., senior Colby Osborn, who serves as the Relay for Life head chairman at WKU.

Regardless of the competitive nature of the game, sidelines were packed with chants and cheers of encouragement for teams participating in the tournament.

Bowling Green senior Kelsey Beach, who serves as a chair member for Relay for Life, recognizes the event as a success.

“We didn’t have a set number for the amount of teams we wanted,” Beach said. “It’s really exciting to see such a diverse group of students show up.”