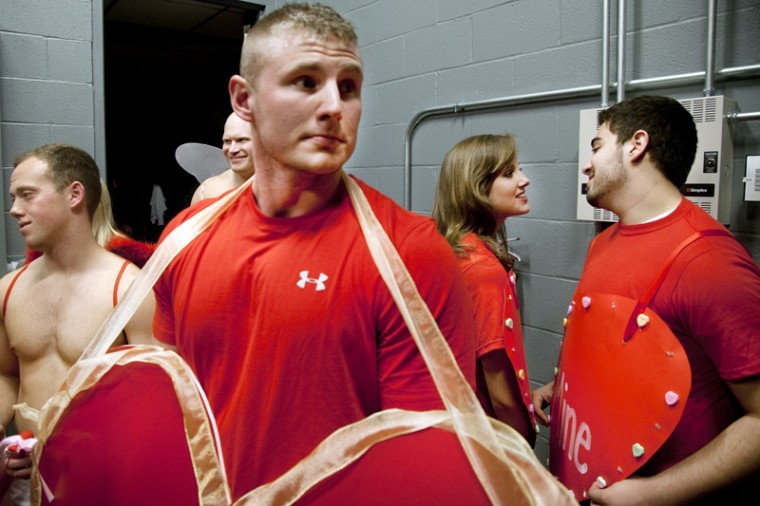 Bowling Green senior Kris Horn, center, waits backstage while fellow contestants Alex Gonzalez and Kim Hatfield, right, talk with each other before the question and answer portion of Beauty and the Greek. Horn and his partner, LB Wathen, won the pageant on Wednesday in Downing University Center Auditorium.

Love was in the air at Omega Phi Alpha sorority’s first Beauty and the Greek pageant Wednesday night in DUC.

There were eight couples who competed in the pageant, an event to raise money for the Hope Heart Institute.

The Hope Heart Institute researches cardiovascular disease and seeks to educate children and women — who are at the highest risk for heart disease — in heart protection and healthy living.

“We wanted to do a couple’s pageant because no one else has done that,” Kelli Vittitow, president of OPA, said.

There were three rounds of competition — letter wear, talent and Valentine’s Day wear.

In the first round, the contestant and their significant other sported the sponsoring organizations letters in the most creative or fashionable way.

The second round of competition was based on talent, including acts such as singing, dancing and even ribbon twirling and acrobatics.

In the final round, Valentine’s Day wear, there was no shortage of hearts, pink and red and smiling couples.

In addition to a creative costume, each couple had to answer a question from the host, such as why they believed they were suited to be crowned Beauty and the Greek.

In between competitions, the organization made sure to keep the audience entertained with clips from Nicholas Sparks books-turned-movies, the Newlywed Game and line dances such as The Cupid Shuffle.

For the talent portion of the pageant, Wathen and Horn did a cheer routine, complete with Wathen being thrown — and caught — by Horn.

“I have never cheered before. I played soccer for 17 years,” Wathen said. “(Horn) cheered for a very long time and he is a good coach and we have a lot of trust in our relationship. The stuff we did on stage I learned last night.”

“We are really excited,” Wathen said. “Just the fact that we did a performance in something I had never done before was an accomplishment for us. We’re really happy that winning came along with it.”