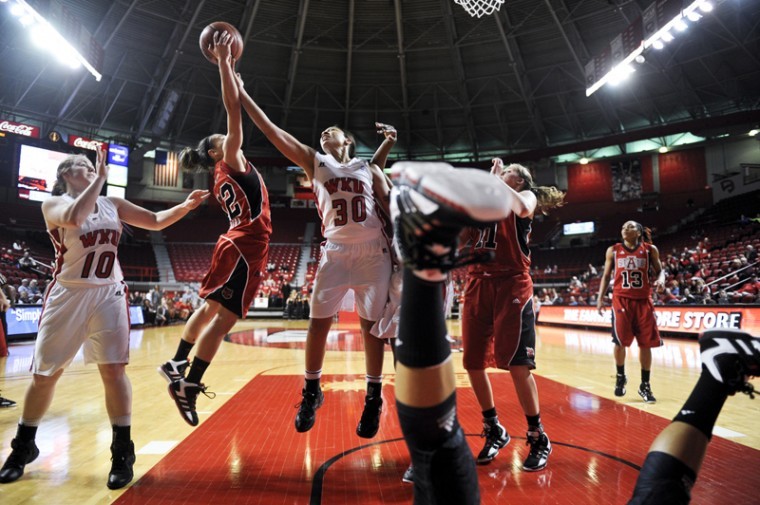 Neither Head Coach Mary Taylor Cowles nor her players had to look far for explanations for WKU’s 56-53 loss to Arkansas State on Wednesday in Diddle Arena.

When asked about the loss after the game they pointed to one stat: 28 turnovers.

That total was a familiar and depressing number for a Lady Topper team that had also committed 28 turnovers on Saturday in a 70-33 loss to South Alabama.

“You’re not going win basketball games turning the ball over 28 times,” Cowles said. “That’s a proven fact. We’ve proven that in games past. And the biggest concern is consecutive games in mid-February.”

The sloppy ball-handling negated other things the Lady Toppers did well.

And they also got big nights from senior guard Vanessa Obafemi, who scored 14 points with three 3-pointers, and senior forward LaTeira Owens, who added 12 points and 10 turnovers.

But Owens echoed her coach, saying the team was done in by its own miscues.

“Turnovers in February isn’t good,” Owens said. “Twenty-eight turnovers in February, that’s taking away 28 chances that we could have scored, got fouled, got a good shot. It’s coming down to the wire that we need to focus on whatever is going on with the ball.”

Despite the rampant turnovers, the Lady Toppers still had a chance to win late.

Trailing 54-51with 17 seconds to play, WKU inbounded the ball and ran a play designed to get Obafemi an open shot from the perimeter.

She got the open look, but unfortunately for the Lady Toppers missed the shot.

“That was exactly how the play was drawn up,” Obafemi said. “I had three screens to get open, and my teammates did a great job. I was wide open.”

Owens collected the offensive board and was fouled going back to the basket. She hit both ensuing free throws to cut the Arkansas State lead to 54-53 with seven seconds left.

Red Wolves forward Jane Morrill pushed the lead back to three with a pair of free throws, giving WKU the ball back with five seconds left.

But Fothergill, who hit two 3-pointers earlier in the game, saw her potential game-tying three bounce off the iron at the buzzer.

Yet the Somerset native may not have had to take the last-second three had it not been for 28 turnovers which came before it.

Senior center Jasmine Johnson, who played just six minutes, was the only WKU player to play that didn’t commit a turnover.

“We bust back out at South Al and then again tonight with careless, careless effort,” Cowles said. “That’s very intriguing as a coach because you work hard to get the ball back defensively… and you don’t even give yourself an opportunity 28 times. That’s frustrating.”

The Lady Toppers got out to a slow offensive start from the beginning.

After an Obafemi three eight seconds into the game, WKU didn’t score agin until a Mosley jumper with 12:55 left in the first half.

The Lady Toppers fell behind by five points three separate times in the first half before launching a 9-4 mini-run to take a 25-24 halftime lead.

But the Lady Toppers saw that lead slip away, as they committed 13 second half turnovers.

WKU grabbed the lead back two minutes later on an Owens three, just the fourth of her Lady Topper career.

But the Red Wolves then launched an 8-0 run over the next three minutes, taking a lead they wouldn’t relinquish.

The Lady Toppers will play their regular season finale at 1 p.m. on Sunday in Diddle against Middle Tennessee State.

“I think they’re smart enough to realize we’ve got one game left in our regular season, and that’s it,” Cowles said. “That’s all the time we have left.”