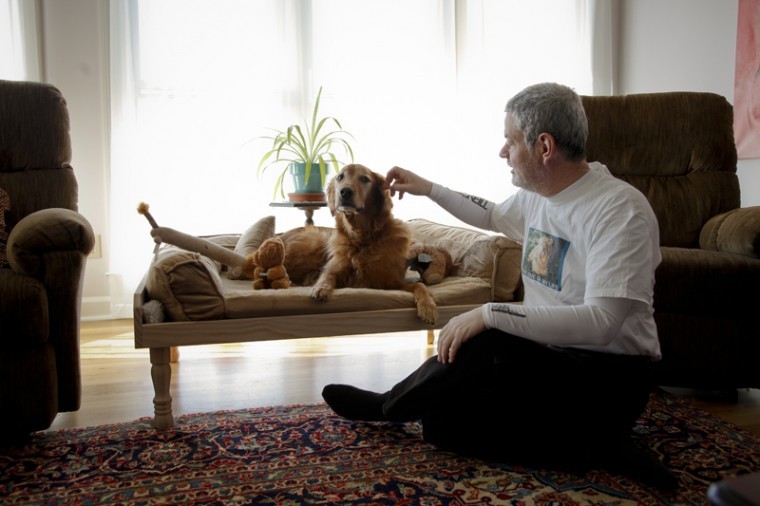 Peter Hamburger, the head of the mathematics and computer science department, built a couch especially for his golden retriever, Lily. “I’ve had many dogs, but she’s by far the best,” he said. “She is my valentine.”

His students know him for his professional, no-nonsense persona.

His colleagues see him as the department head of mathematics and computer science, who strives to set the bar high.

Although Peter Hamburger has a tough exterior, there’s one leading lady who knows a different side of him.

This lassie is his brown-eyed companion, Lily.

“She’s my Valentine, even though I have a wife,” he said.

Don’t jump to conclusions, though.

Lily is his 6-year-old Golden Retriever from California.

When she could no longer take care of Lily, Hamburger and his wife, Edit, made the cross-country drive to bring her to their home.

Hamburger said he didn’t think twice about going to get her.

“I really needed a dog,” he said. “I was starting to get much older, but when I got the dog I was more active, fun and energized.”

Hamburger has felt a connection with canines since he was a child in Hungary.

When he was five, his father was detained in a Hungarian political prison, known as a gulag.

He noticed one hound in particular with nice eyes and big ears.

“I believed that dog smiled at me,” he said. “I felt safe and comfort from that.”

From then on, whenever he felt scared or alone, he imagined the dog from that day.

He also claimed a Hungarian Puli, or sheepdog, that roamed around his neighborhood.

Hamburger was unable to bring the Puli when he left for America, so he paid a neighbor to watch after the dog.

He later found out that they killed the dog and kept the money.

“I decided after that I would only get a small dog because of what happened to my dog from Hungary,” he said.

After arriving in the United States, his young daughters grew attached to a Yorkshire terrier they named Samy.

“He has a love for all dogs,” said Bruce Kessler, associate dean of Ogden College of Science and Engineering.

The pair traveled to Spain for a conference when that love became apparent.

Kessler said Hamburger spoke to every dog they saw in English.

“Of course we weren’t speaking Spanish, so I thought we were going to get tazed,” he said. “He’s a bit of a nut about puppies, which is nice.”

And he’s no different with Lily.

Hamburger’s neighbors and WKU retirees Carol and James Barksdale are fully aware of the time Hamburger takes out for her.

“Peter is so devoted to her,” Carol said. “They do all kinds of things to keep her healthy.”

The couple can count on seeing them strolling around the neighborhood or playing Frisbee in a nearby field.

Carol, who is usually afraid of large dogs, said Lily is always gentle to her.

“I’ve never seen her aggressive at all,” she said. “She doesn’t have a rough bone in her body.”

Aside from being poised, Lily also likes to listen to classical music, watch TV and Skype.

Hamburger said she loves to Skype his daughter in California.

Her guilty pleasures include going to the spa and eating hamburgers – no pun intended.

Lily won a dog pageant last year, which included a free trip to a puppy spa.

Hamburger said after one visit they were hooked.

In March, he plans to throw a party for Lily’s seventh birthday.

Every year, they invite their friends to come eat cheeseburgers and celebrate.

One year, his faculty and staff thought Lily was his wife because of the invitations. He had to explain to them that she was his dog.

Carol looks forward to Lily’s birthday this year and hopes she can attend.

“Lily shows a very sweet, tender side of Peter,” she said. “Lily can bring out the best in any of us.”