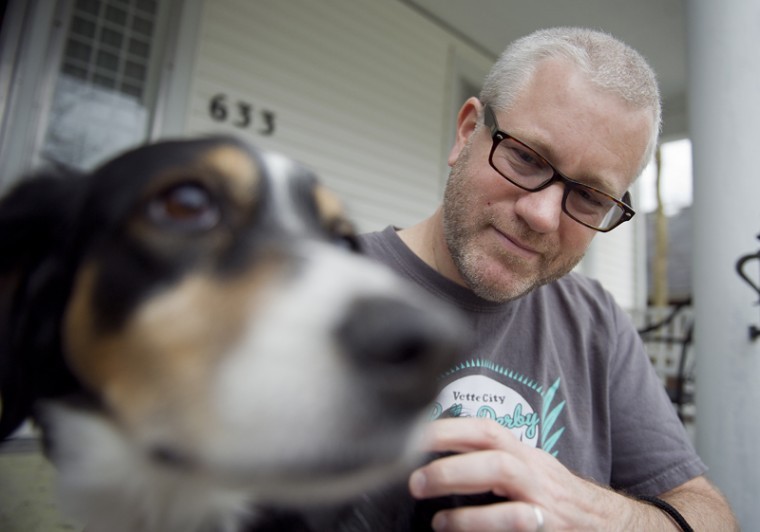 Even though death is inevitable, some might not be fully prepared when it occurs.

For GIS Analyst CJ Johanson, facing that fate was just as hard as the heart-wrenching end of Old Yeller.

Johanson and his wife, Yvonne Petkus, bought their dog, Sambuca, as soon as they purchased their first home in Seattle.

The couple, which had grown up owning family pets, couldn’t wait to share their lives with the mixed breed, black-haired pup.

“We’d lived in Seattle so long and been through so much with her,” Johanson said. “She was a part of our family.”

When they relocated to Bowling Green in 2001, fun, loving Sambuca was in tow.

Petkus began her job as an assistant professor of art at WKU while Johanson developed computerized maps and models of the Barren River.

They decided that Sambuca needed a friend.

In 2005, they adopted Kumiko from the Bowling Green Humane Society.

Johanson said the furry black-and-white puppy just gravitated to them.

“I think Kumiko was just happy to be in a home,” he said. “Sambuca even shared her bed with her.”

Sambuca was the leader and protector of Kumiko, especially during storms.

Johanson said both pups were afraid of thunder and fireworks.

“She kind of got over that fear for Kumiko,” he said. “She was the big sister.”

The third addition to their family came in January 2011.

It was quirky cat named Hank, also from the BGHS.

Petkus and her friend Ingrid Cartwright went to purchase Fur Ball tickets, an annual BGHS fundraiser, and fell in love with the orange-furred feline.

“We saw Hank, and I think we both knew he was going home with her,” said Cartwright, a WKU assistant professor of art history.

So she took pictures of Petkus with Hank to send to CJ.

“We knew if he saw them together, he would have to say yes,” Cartwright said.

Sure enough, their plan worked, and Hank joined the family.

They all enjoyed curling up on the couch or going to the local dog park.

At the park, she’d flock more to new people rather than mingle with the other dogs.

“Sambuca was like a big ol’ teddy bear,” said Hurst, who prepares exhibits at the Kentucky Museum.

Squirrels and birds tend to catch her attention.

Hank on the other hand is quite a character.

“He does the craziest things,” Cartwright said. “He’s a really funny guy.”

He has a cardboard box that he’s gnawed to shreds.

Hank did his own thing while the dogs played together, until Sambuca got sick.

They first noticed something was wrong when she would throw up once a week.

“It got to the point where she couldn’t keep anything down,” he said.

Visit after visit, the vets couldn’t determine a cause, and nothing helped her condition.

Johanson said Kumiko could tell that Sambuca wouldn’t be around much longer.

“She seemed kind of depressed,” he said.

The couple finally decided to have Sambuca put down at the Greystone Pet Hospital in June 2011.

Johanson said the staff was very empathetic about their decision to have her cremated.

“It’s always hard making that decision, but she was starting to suffer,” he said.

They keep a wooden box with her remains in a special place in their dining room.

Even though their beloved dog of 14 years is gone, she’s still close to their hearts.

Johanson remembered how Sambuca would rush to the kitchen window and scoot the curtain when they pulled up from work.

“It was definitely an absence that we felt for some time,” he said. “We still sometimes look towards that window thinking she’s there.”