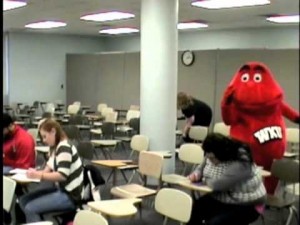 Ellen Degeneres showed a segment of video that Big Red and company created for her daytime television show dance dare on Monday afternoon.

One of the students who plays Big Red said they were in class when they received an email from the “Ellen” show saying their YouTube video would air.

“It was a silent, awkward, happy moment,” said the student. All the students who serve as Big Red must remain anonymous.

Paula Davids, athletic marking assistant or “Big Red’s Mom,” is the coordinator for Big Red, and said that she got the same frantic calls from others today after the show.

“My hair dresser (also) called and was so excited to see Big Red on Ellen,” Davids said.

Degeneres had dared her viewers to a dance challenge of filming themselves dancing behind unaware targets.

One of the students that serves as Big Red saw a tweet from Ellen’s Twitter account and took it to the other students who participate as the mascot.

This student posted the idea on the closed group Facebook page, where the other students were able to work out the filming arrangements.

The group filmed for two days around campus for a total of four hours.

The student who proposed the idea, also edited two versions of the video, a mobile friendly and the extended YouTube.

Although the group wasn’t expecting to win the dare, they were hoping to be the first mascot on the challenge. This wasn’t the case since two other mascots were shown on the dance dare segment, the Oregon Duck and the Syracuse’s mascot, Otto the Orange.

The experience earned Big Red national exposure and a $100 gift card to JCPenney’s, which they will use for props for the mascot.

The students said they are excited for the national exposure.

“I’m glad we got to do it, it got us back to some of Big Red’s roots,” one student said.