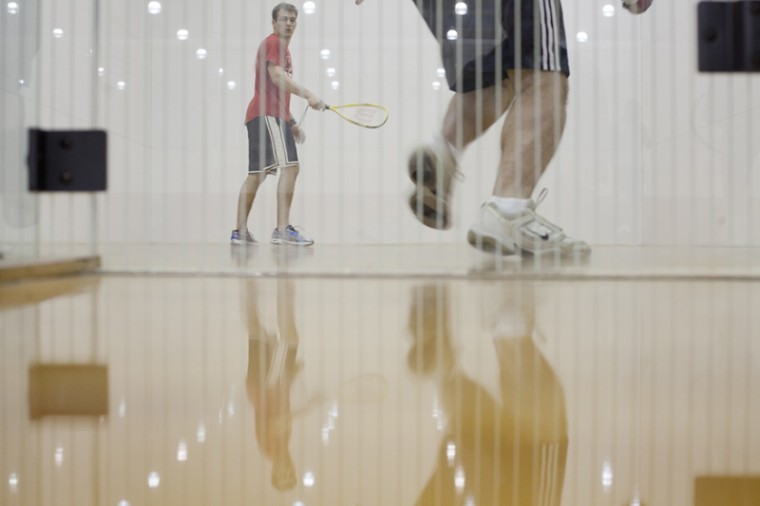 Colby Osborne, a junior from Brentwood, Tenn., plays in the racquetball intramural games that were held in the Preston Athletic Center on Friday, Feb. 17.

As the ball soars from wall to wall, Franklin sophomore Ethan Mefford begins to unwind.

For several students, the WKU Racquetball Club is a vehicle for them to just be themselves.

Louisville junior Noah Baker took over as president of the club during the 2011 fall semester. He said the club provides students with a competitive atmosphere.

Since the club began in the spring of 2011 under adviser Luke Bartlett, it has grown from approximately 15 to 20 members, Mefford said.

Although the team practices three nights a week for two hours, Baker said he tries to keep the member requirements fairly simple.

“I want people to be in the club,” Baker said. “I don’t make anything mandatory, and there aren’t any dues.”

Baker and Mefford agree the time commitment is minimal. Baker said the average racquetball member commits four hours per week plus any additional tournaments they enter.

Along with recruiting, the racquetball club’s main goal is to improve skill-wise by attending tournaments, Baker said.

“We mainly just want to go to tournaments and make a very strong appearance,” Baker said. “Also, we want to host one tournament this year.”

Baker is currently in the process of organizing a tournament he hopes will take place the second weekend of April.

In addition to tournaments, the team works in practice to hone their abilities. Mefford said it’s beneficial to hear others’ input on how he can work on his game.

Lexington sophomore Regis Pearson said one knock against playing with the same people is that they learn your style.

“You play with the same guys, so you learn how people play,” Pearson said. “That makes it a little bit harder because everybody knows your shots.”

The club plays by the USA Racquetball rules and participates in all types of games including singles, doubles and cut-throat, a game with three people.

Mefford said racquetball is basically indoor tennis where the net is replaced by a wall.

“You have to hit the front wall before the ball bounces on the floor twice,” Baker said.

Being a young club, Pearson said he hopes to advance and that they are all learning as a group.

Members also participate in community service so that they can earn budget points to help keep their club alive.

The three members, Mefford, Baker and Pearson, concur that WKU’s racquetball club is for anyone and everyone.

“It’s pretty simple (to join),” Baker said. “You just have to want to play racquetball.”

The biggest requirement to be a member, Baker said, filling out a medical release form in order to actually participate.

“It helps to be good at racquetball,” Baker said. “But it’s just supposed to be fun, first and foremost.”

A majority of the members grew up playing recreationally and only have a few years of experience.

“(Racquetball is) fun, and it’s a good way to meet people,” Mefford said. “It’s something to do, a way to unwind.”