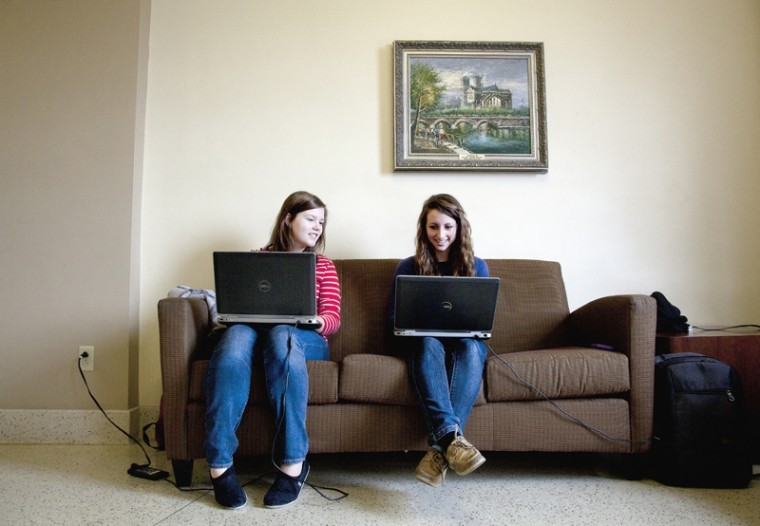 Gatton Academy juniors Allison Jones Erica Plummer sit in the lobby of Florence SchneiderHall Tuesday afternoon. Plummer said that choosing to attend the academy is one of the best decisions she has made. The academy is comprised of 126 junior and senior high school students and ranks as the fifth best public high school in the nation, as rated by Newsweek.

Gatton Academy of Mathematics and Science celebrated Valentine’s Day with an open house. In the process, it received a special Valentine’s gift — a $20,000 check from AT&T.

The money will go toward an innovation and leadership-themed speaker series to help inspire both Gatton Academy and WKU students to excel in math and science.

Tim Gott, director of Gatton Academy, said the academy tries to put on an open house every year to raise awareness and get people to learn what the academy is all about. This year Valentine’s Day looked like a great choice, and also provided an avenue to reveal the gift, he said. He wants the lecture series to show students the possibilities in terms of careers in today’s world.

“It’s so students of the Academy and the university get a better idea of what’s out there,” he said.

Julia Roberts, executive director of Gatton Academy and The Center for Gifted Studies, hopes the gift from AT&T will inspire others to contribute to the cause of innovation and leadership.

Roberts said the hope is for the lecture series to begin next fall and will be open to the community, not just Gatton Academy students.

“We want to bring in people who will spark their imagination,” Weller said. “I hope it inspires them.”

Weller echoed Gott’s desires for the program in his speech to both current and future Gatton students as well as faculty members.

“What we hope this will do is connect our students here with their potential,” Weller said. “Bring entrepreneurs and other key leaders that can help and will communicate to them the possibilities of what they can do.”

During the speech where he presented Roberts with the $20,000 check, Weller said he supports Gatton Academy because it gives young people the opportunity to be exceptional. He also said in today’s world it isn’t enough to be the smartest or the fastest in a career, one must be able to press their advantage and take it to the next level.

“I can’t think of a better investment than to invest in our future leaders.”