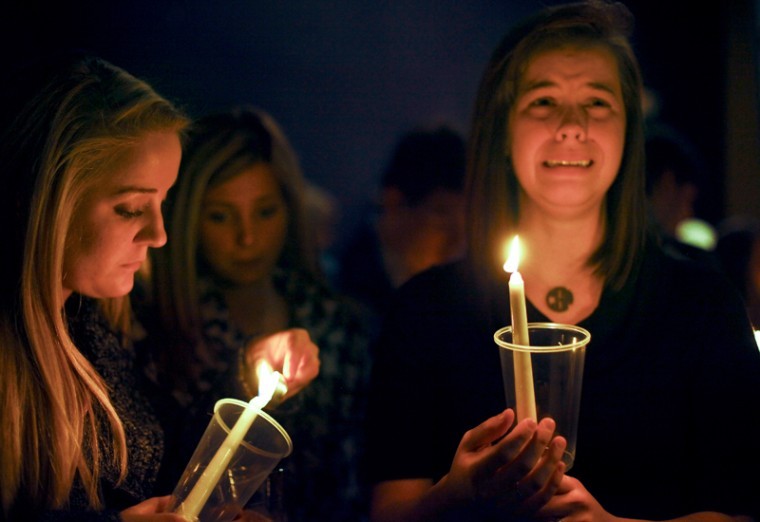 Boling, a Bowling Green senior and member of SAE, died Friday morning at his off-campus residence of unknown causes.

As Christian music resonated in the air, candles illuminated the room while a slideshow of Boling’s life played. SAE brothers hugged each other in tears, along with other Greeks and non-Greeks alike.

Travis said SAE is known as a fraternity with many songs, so the brothers sang one of their songs entitled “Friends.” Travis said the song was very relevant for Friday night’s memorial service.

Brothers frequently repeated their secret saying of “Phi Alpha” in tribute to Boling.

Boling’s fraternity big brother Will Hoagland, a senior from Louisville, was one of the many brothers who spoke on behalf of Boling.

“I know Brad — he’s smiling down on us right now,” Hoagland said in tears.

People were given the opportunity to say how Boling affected them throughout the service.

Between the sobs and sorrow, comic relief filled the somber room as well.

Bowling Green senior Austin Reed remembered the times when Boling, who always wore a bow tie, would have to tie his bow tie for him.

“Tonight I wore a bow tie tonight — I looked up a YouTube video on how to tie it,” Reed said, laughing.

Lexington junior Sheridan Sims also spoke on behalf of SAE during the memorial.

“We pride ourselves as the gentlemen,” Sims said. “If anyone has taught me to be a true gentleman, it was Brad.”

Sims also said that Boling’s mother asked him to say thank you to everyone who attended the memorial service.

Along with brothers and friends speaking, Father Mike Williams from the St. Thomas Aquinas Catholic Campus Center led the group in prayer.

Longtime friend and current Miss Kentucky, Ann-Blair Thornton, said she and Boling had known each other since middle school.

“He is just the most fun and positive person,” she said. “He always had a bright smile on his face.”

Thornton, who is an SAE sweetheart, grew even closer to Boling in college.

“I remember the night he pledged SAE,” she said. “That was just a cool moment to share with him.”

Travis said he remembers Boling as a “first class guy” who was “dependable and loyal.”

“We’re really saddened and shocked by the sudden tragedy,” Travis said. “He definitely left his mark on the fraternity, university and the community.”