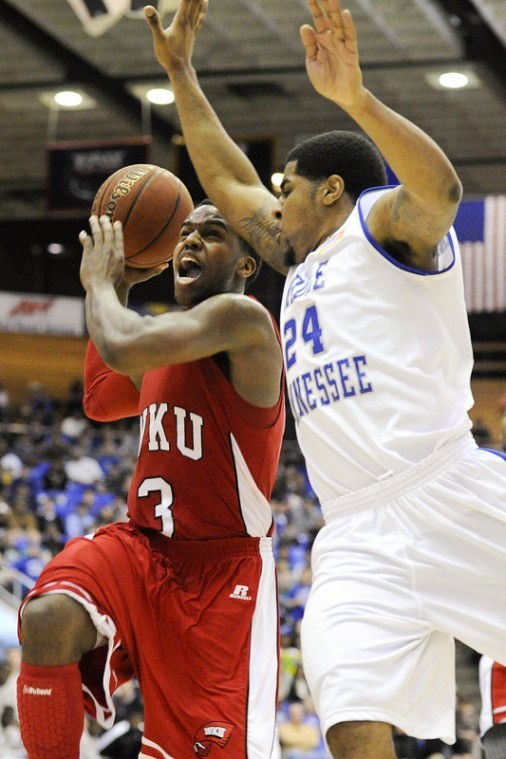 WKU reverted back to some old bad habits on Saturday.

Yet again, the Toppers found themselves ahead comfortably in the second half at Troy — by 11 points to be exact.

All they needed to do was maintain the lead and their focus — something the players and coaches cited as a problem early on in the season.

WKU had won three out of four games prior to Thursday’s loss at Middle Tennessee State, and the young team showed that it might have left behind focus issues that plagued them before.

The focus problems crept back out on Saturday as the Toppers relinquished a 44-33 second half lead and eventually fell to Troy, 83-77.

“In the first half we were playing defense, we were playing good,” freshman guard T.J. Price told WKU’s Big Red Radio following the game. “We came out in the second half, and we relaxed too much.”

Instead of putting Troy away, WKU watched as guard Alan Jones picked apart the Topper defense for 18 points to spark the come-from-behind win.

The loss came on the heels of a loss to MTSU in which the Blue Raiders left the door wide open for WKU by missing free throws down the stretch. The Toppers couldn’t capitalize despite hitting every free throw they shot in the game.

Price said he wasn’t trying to make any excuses, but he felt like fatigue was a factor in Saturday’s loss.

“Thursday we played, we gave it all we got,” Price said. “We had one day to rest and come back and play against a good Troy team.

“Fatigue did play into this game and it got to us at the end.”

“We just started settling for the first available jump shot on the perimeter,” he said. “All of a sudden they weren’t falling like they were in the first half.

“I thought we just kind of panicked a little bit. Give Troy credit. They deserved to win the game (Saturday).”

Now WKU will face Florida Atlantic in the friendly confines of Diddle Arena, where it’s had a little more success. The Toppers are 5-7 at Diddle and have seen the three largest home crowds of the season show up in the last three home games.

Harper said he’s happy to play back home again, but he knows the team that showed up on Saturday can’t show up on Thursday.

“We’ve got to get back to that aggressive level … We need to get back in the gym and really shore up some areas where we were deficient (on Saturday) on the defensive end.”