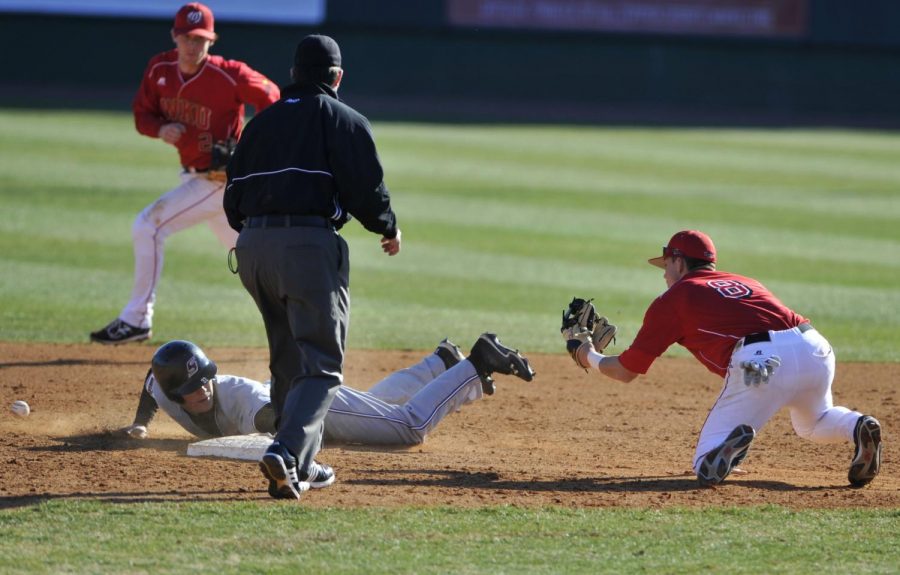 Junior shortstop Steve Hodgins drops the ball on Saturday as he tries to tag a Southern Illinois runner out at second base. WKU lost 10-3 at Nick Denes Field.

WKU (2-4) was unable to match the offensive production of Southern Illinois on Saturday as the Salukis exploded for 10 runs on their way to a 10-3 victory at Nick Denes Field.

Southern Illinois (3-3) put up seven runs in the fifth and sixth innings to open the floodgates on the Toppers.

Sophomore right-hander Justin Hageman made his first start for WKU this season after having a bout with elbow tendonitis.

However, Hageman had a pitch count set on him that allowed him to only go three innings while giving up just one unearned run on one hit and four walks.

Head Coach Matt Myers said that other than the four walks he thought Hageman did well with the restrictions that were placed on him.

“He felt fine,” Myers said. “I just wasn’t going to risk it. He had a 50-pitch count and actually we were a bit over.

“His competitiveness could get him five innings but that might sacrifice something down the road and I wasn’t going to do that.”

Hageman left the game while WKU trailed Southern Illinois 1-0, giving way to a bullpen that couldn’t contain the Salukis’ offense.

Freshman left-hander Ian Tompkins came on in the fourth inning and, at one point, walked three straight batters that allowed a run to score for Southern Illinois.

It was more of the same for Tompkins and WKU in the fifth inning as he gave up a single and hit a batter to set up runners on first and second base with one out.

An RBI double by Saluki catcher Luke Mottashed, an RBI single by shortstop Jake Welch and a two-RBI double by third baseman Donny Duschinsky — all with two outs — plated a total of four runs in the fifth inning to give Southern Illinois a 6-2 lead.

WKU junior right-hander Andrew Zimmerman took to the mound for the sixth inning and got off to a rough start as well, giving up a two-run home run off the bat of Southern Illinois’ designated hitter Austin Montgomery before recording an out.

Zimmerman then allowed a two-out RBI single that made it a 9-2 deficit before finally inducing a groundout to end the inning.

Those two innings — characterized by walks, hit batters and two-out hits — gave Southern Illinois a lead that was too much to overcome for the Toppers.

Although Glasscock came in with the game out of hand, he gave the rest of the bullpen some much needed rest, going 3 1/3 innings while allowing only one run on three hits and a walk.

Myers said he was looking for someone to go out there and be competitive, and Glasscock rose to the occasion.

“Tate Glasscock was outstanding,” Myers said. “He needs a lot of credit. I was looking for someone to be competitive and he went in and was very competitive.

“That’s a credit to that young man’s toughness and character. He’s going to get another shot real quick because of that.”

Myers didn’t make any players available to the media following the game.

Glasscock’s performance also saved arms for tomorrow’s game when the Toppers take on Southern Illinois in the rubber-match at 1 p.m.

Junior left-hander Tim Bado, who’s coming off an injury, will be making his first start for WKU. Myers said he’ll probably be on a pitch count of around 60 pitches.

Myers said not only will the pitching have to improve, but the overall execution on the field has to be better for them to be any better than an “OK” club.