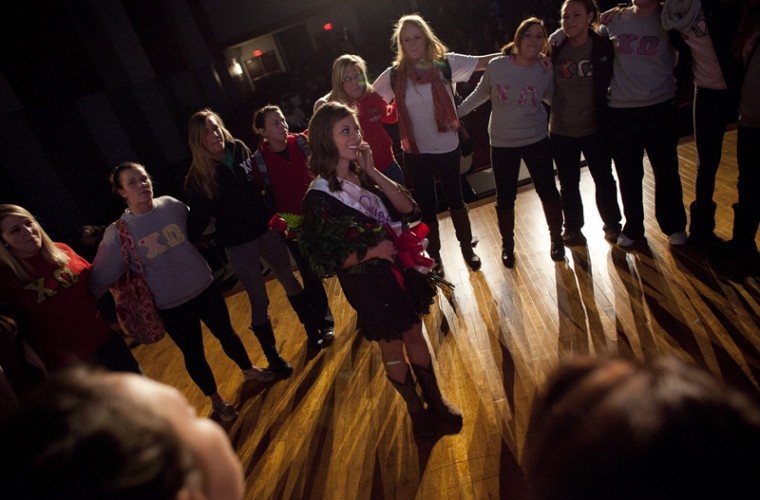 Morgan Threlkeld, a freshman from Madisonville, Ky. is congratulated by other Chi Omega members after being declared the winner at the Contests of Sigma Phi Epsilon Queen of Hearts Beauty Pageant in the DUC auditorium on Feb. 15, 2012.

Sweets Week is the organization’s event to raise money for their philanthropy, YouthAIDS.

“The Sig Ep YouthAIDS partnership serves as a platform for American youth to get involved in the fight against HIV and Aids,” Kyle Knight, Sig Ep member and pageant host, said. “With all the struggles these young people are faced with, any amount of support is appreciated.”

In the first round of competition, each woman sported her sorority’s letters in her chosen fashion. Sig Ep men, dressed in black suits and bright red ties, escorted the contestants.

In between each competition, a senior member of Sig Ep preformed covers of popular songs.

The fraternity’s chaplain, Josh Wiseman, said he has played guitar since he was sixteen, but recently developed a passion for performing.

“I’ve played numerous times,” Wiseman said. “I played in a church group overseas when I was deployed. I guess that’s when I really started to perform. It just took off from there.”

In the next round, contestants dressed in their best dresses and were asked one question by Knight that they had to answer on stage.

The questions ranged from personal role models to opinions on stem cell research.

When asked how she would solve the crisis in the Middle East, Phi Mu freshman Brandi Ratterman said, “I think we should all be friends.”

The final round of competition was perhaps the most diverse. Each contender was asked to showcase her talent.

The variety of talent included instrument playing, rapping, singing, and even a rendition of a Saturday Night Live skit.

Judges crowned Chi Omega freshman Morgan Threlkeld the Queen of Hearts after her performance of Taylor Swift’s “Tim McGraw.” Threlkeld was not available for comment.