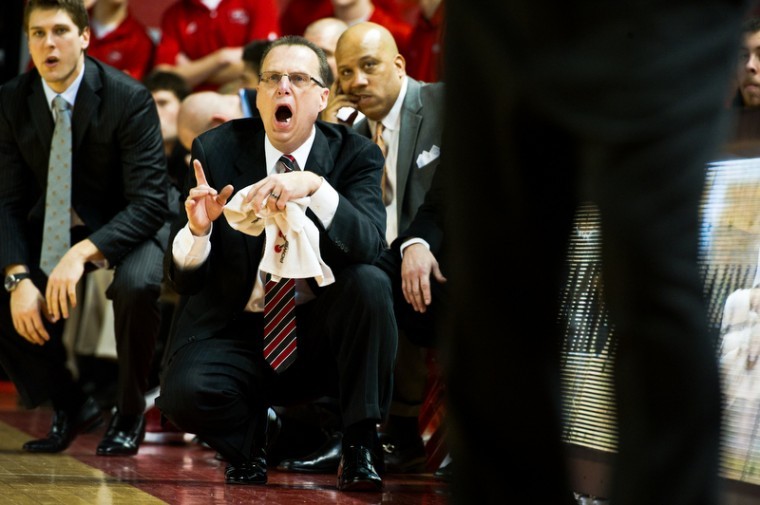 Ray Harper was named the full-time coach for WKU's men's basketball team on Sunday. Since Harper took over on Jan. 6, WKU has seen the four largest home attendances this season in Harper's four games at Diddle Arena.

The collective wish of many WKU fans has finally been granted.

Athletics Director Ross Bjork announced via Twitter on Sunday that Ray Harper’s interim tag has been removed and the former assistant coach has accepted the job to be WKU’s full-time coach.

Bjork tweeted: “#HilltopperNation welcome your new #WKU basketball coach. Congrats Coach Harper!” along with a photo of the two of them standing together.

Harper took over as interim head coach on Jan. 6 after former coach Ken McDonald was fired. Since then, WKU has posted a 4-7 record, with home attendance higher than it has been all season. The four home games under Harper have accounted for the four highest home crowds this season.

“This is a destination job for me, and there is no place in the country I would rather be,” Harper said in a statement. “It is an honor to walk into the doors of Diddle Arena each and every day. We have the best fans in the nation, and we will give them the type of program and winning results they deserve.”

As WKU’s season progressed and the losses began to mount, fans were clamoring for Harper to replace McDonald.

The fans saw a coach who had won at every level he had coached. In 12 seasons at Kentucky Wesleyan College, Harper made the Panthers a perennial powerhouse in Division II and won two national championships along with five runner-up finishes.

Harper was at the helm at KWC when several athletic programs were sanctioned by the NCAA. The NCAA found that two players from KWC’s 2002-2003 national runner-up team were ineligible and the Panthers were forced to vacate their Great Lakes Valley Conference championship and their runner-up finish.

When Harper was named the interim coach, he acknowledged what happened while at KWC, but said anyone who has read the case understands the full dynamic of it, and added that he wasn’t concerned about it.

Bjork said he felt the same way, and that he looked at Harper simply as a winner.

On Sunday, Bjork and President Gary Ransdell reiterated that sentiment.

“We are extremely proud and excited to name Ray Harper as our new head men’s basketball coach,” Bjork said. “Ray is a proven winner as a head coach…and we have total confidence is his ability to return our program to prominence.

“He is well respected by his peers in the coaching profession and his long standing ties throughout the Commonwealth of Kentucky will greatly benefit our program.”

Harper will be officially introduced as the head coach in a press conference on Monday night, which will take place at 6 p.m. on Diddle Arena floor.

Bjork tweeted on Sunday that the event is being called “Rally for Ray Harper and WKU Basketball.” He said it “will be like a game night,” with player introductions, the band, Topperettes and Big Red.

“I am delighted that Ray Harper has accepted our head coaching position,” Ransdell said. “This is the job he wants, and we want him in this job. He has demonstrated that he can recruit and lead young men with high character and good talent. I look forward to sharing a long and successful future with Coach Harper.”

Harper said WKU isn’t winning as consistently as he’d like to. The Toppers have a 9-18 record and are on pace to finish the season with their first losing record since the 1999-2000 season.

But Bjork acknowledged that Harper didn’t exactly walk into an ideal situation.

“We put him in a very challenging situation by naming him our interim coach on Jan. 6, but he has performed admirably in these unique circumstances while bringing much-needed energy and excitement to our program,” he said. “He has a comprehensive plan for improvement for every aspect of our basketball program, and he is the right man to lead our historic program into the future. We are confident he will have us back on the path for success in short order.”