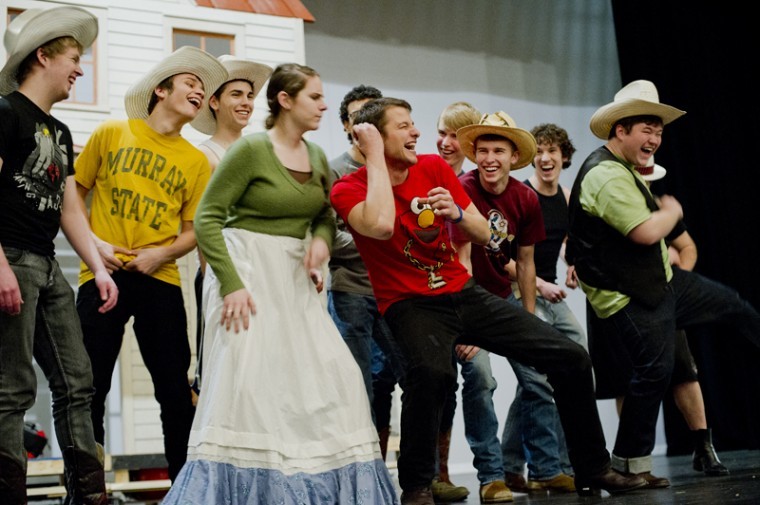 The cast of “Oklahoma!” performs their first run-through of the entire show at rehearsal Thursday night.

The sounds of stomping cowboy boots and the swishing of long, ruffled skirts filled the rehearsal space in Gordon Wilson Hall the night of Feb. 14.

WKU students, clad in a bizarre mix of street clothes and costumes, were preparing for the WKU Theatre & Dance Department’s upcoming production of “Oklahoma!”

Jeremy Benton, the director for this show, said the popular original script has undergone some changes.

Benton, a WKU alumnus who has since performed on Broadway, said this version of “Oklahoma!” is more modernized.

He said most productions of the show have an old-fashioned tempo, one that doesn’t necessarily mesh with a modern audience.

In an age of YouTube and fast-paced films, Benton wants “Oklahoma!” to go with the times.

“I hesitated to cut any iconic memories,” he said. “I just wanted to massage the way it flows.”

Louisville freshman Will Linder said one of the changes in this particular show pertains to the age of the characters.

Linder said that in the film version of “Oklahoma!” the main roles were in their mid-20s. Under Benton’s direction, the characters have become younger and less experienced in love.

Meredith, who plays Andrew Carnes in the show and is also the assistant director, said both the promotional poster and the set pieces are indicative of change.

When casting “Oklahoma!” earlier this semester, Benton also made the decision to downsize.

“The audience will remember every person on the stage,” he said.

Benton said the cast is a large ensemble with feature roles, instead of a few roles and a chorus of nameless faces.

The ensemble is made up of students with various experiences and talents, Benton said. Some, like Meredith, have devoted a lot of time to the theater and plan to pursue it in the future.

Others, like Linder, are making their theater debuts in “Oklahoma!” Linder is currently majoring in Music Performance, Biology and Cultural Anthropology.

Another newcomer to the WKU stage is Nashville senior Allison Quaintance.

Quaintance, along with other dancers, take part in the dream sequence at the end of the first act. She said dance is an important part of “Oklahoma!”

“It helps to tell the story better,” she said.

Benton said he has enjoyed working with the other departments.