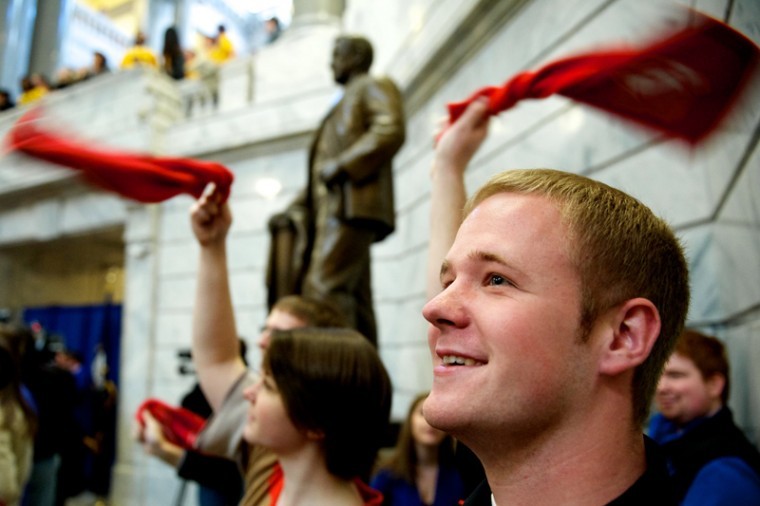 Cory Dodds, director of information technology for SGA, waves his red towel at the Kentucky State Capitol in Frankfort Tuesday during the Rally for Higher Education. With only four SGA members attending, WKU's delegation was smaller than most years and smaller than most other universities.

The Student Government Association attended the Rally for Higher Education in Frankfort on Tuesday, but with considerably fewer representatives than the other public universities.

“I thought it would be a good experience to be able to come to the state capitol and rally for something I really care about,” Treece said.

Bryan said that, traditionally, WKU has had a larger delegation with anywhere from 12 to 30 students in the past.

Part of the problem with students not being able to attend was due to the rally being so soon after the break, Bryan said.

Dodds said he attended the rally because he believes civic engagement is important and that it’s important for students to be able to voice their opinions about student issues to legislators.

The rally began at noon on Tuesday. Before the speakers began, many of the schools stood in the foyer of the Capitol Rotunda and cheered to represent their university. Many of the universities had t-shirts for the rally and brought their mascots along.

Stephens also wanted to be back in time for the senate meeting so he could help generate legislative ideas. Tuesday’s session allowed for several rough drafts for future legislation, he said.

The main topic of the rally that was addressed by many of the speakers was the proposed 6.4 percent budget cut in Kentucky’s post-secondary education funding.

Louisville students in attendance represented this by coming to the rally barefoot, trying to make the point that if higher education budget is cut, it would lead to a stereotypical, barefoot Kentucky.

Student speakers often mentioned the idea of uniting all students as one voice to be heard. Students were also encouraged to leave messages for and write letters to their representatives saying they don’t want budget cuts.

“I just believe that it’s important that we get our voice out there and that we make ourselves heard — that you know, we need funding,” Jankowski said.

Many of the student body presidents brought up the point that with the budget decreases, the burden of paying for school falls to students and because of that, some students might not be able to attend school.

The rally ended with the students yelling out a chant against statewide budget cuts in higher education.

After the rally, WKU’s SGA representatives were able to sit down with a state legislator, Rep. Jody Richards, Warren County Democrat.

Richards is an alumnus of WKU and is on the higher education committee.

“I think it’s pretty vital to meet with legislators and to share your concerns in the capitol, and that’s why I wanted to sit down with a legislator and discuss our concerns,” Bryan said.