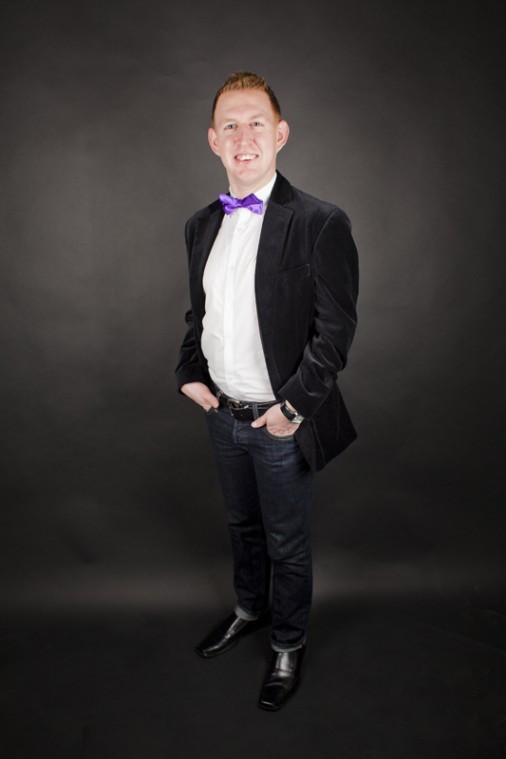 Bowling Green senior Frankie Smith is pursuing his dreams despite a speech disability. He graduates this year with a Design, Merchandising and Textiles degree and is taking a summer internship in New York City to break into the fashion business — proving wrong those who doubted him.

Just by looking, it’s apparent that Frankie Smith has a knack for style and precision.

Every blond strand is meticulously slicked back and each pant leg is smoothly pressed.

It’s when he speaks, Smith said, that “people notice I’m a little different.”

When he was born, doctors assumed he had cerebral palsy.

After further tests and observation, they diagnosed him with a disability called speech apraxia.

“There’s a nerve in my brain that is off-beat that affects my speech and my motor skills,” he said.

But Smith, a senior from Bowling Green, has never let his disability or naysayers hold him back.

In May, he’ll move to New York City for an internship with Michael Simon Designs.

Two years ago, Smith changed his major from marketing to design, merchandising and textiles.

With support from his family and friends, he dove right into his passion.

He told his fashion professor he wanted to move to New York when he graduated, although he’d never been there before.

It was a class trip to New York that brought it all to fruition in May.

“Anybody who’s anybody is there,” he said. “I thought if I want to be the best, I have to work for the best.”

Smith said he wants to do a little bit of everything. He aspires to work for Marc Jacobs or his role model, Rachel Zoe. Meanwhile, Smith made an initiative to earn a promotion at American Eagle.

With six years of experience in retail and almost three years at AE, he thought it wouldn’t be hard to land the assistant manager position.

But he was immediately denied.

“It really got to me because they never really told me why,” Smith said.

The manager was blatantly doubtful about his big city dreams.

“I told my boss I was going to move to New York, and she just looked at me,” he said.

Smith didn’t stay with the company long after that, but he wasn’t going to let it stop him.

“He did have a speech problem, but I think it pushed him to work harder,” French said. “Anything you wanted him to do, he could.”

Smith said he developed that determination because he wanted to prove himself.

“Most people see my disability and think I can’t do anything,” he said. “If you tell me I can’t do something, I want to show you I can.”

Rickard said Smith was always the first to help her with the store displays.

“You can tell he has a desire for it,” she said. “We constantly would talk about him going to New York.”

Rickard said he’ll do great because he’s put in the work to get there.

“He’s made those connections and followed his dream,” she said. “So many people talk about it, but he actually did it.”

French said Smith inspired her to go back to school.

“He’s been my motivation,” French said. “If he can do it through all the things he’s been through, so can I.”

Smith is eager to get to the Big Apple and start working.

He’s been saving money since last summer and is now employed at Hollister.

Although he has a long trek ahead, Smith stands by his motto.

“When people doubt you,” he said, “remember that you have it inside to make it when you believe.”