Lady Toppers fall to South Alabama after rough second half 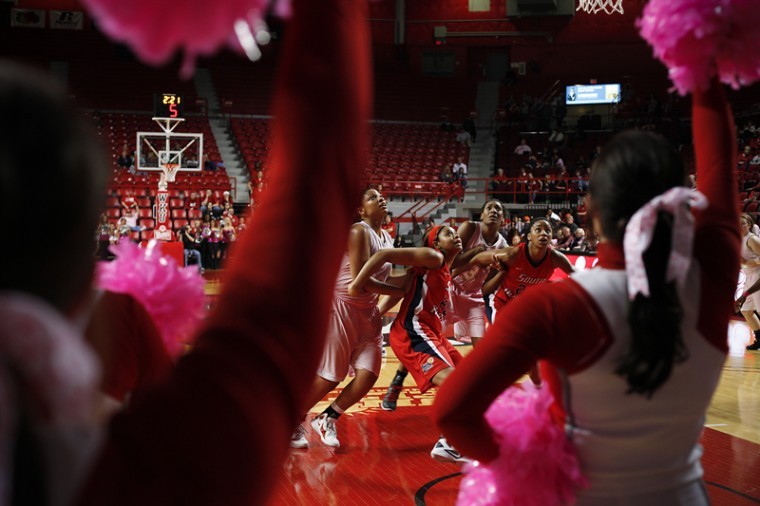 The Women's Cheerleading team used pink pom-poms during the Ladytopper's basketball game in support of Breast Cancer awareness. The team's Assistant Coach was diagnosed with Breast Cancer in May 2011 and is still going through chemo therapy treatments. "Being a coach has made the past year a lot easier," Hall said. "I've gotten a lot of support from the team and their families."

The Lady Toppers controlled play in the first half, shooting 54 percent while holding the Lady Jaguars to 30 percent from the field and taking a 29-21 lead to the break.

But the second half was dominated by South Alabama, which drove, rebounded and defended its way to a 56-52 win over WKU in Diddle Arena.

It was the Lady Jaguars’ (14-9, 7-4 Sun Belt Conference) first ever win on the Lady Toppers’ home floor.

“They came out more aggressive than us (in the second half),” senior forward LaTeira Owens said. “Driving, penetration, we didn’t have anyone that could stop the drive.”

Most of the Lady Jaguars’ second half baskets came on those penetrating drives.

South Alabama shot 50 percent in the second half, getting close looks on nearly every possession.

And on the shots the Lady Jags didn’t make, they scooped up the offensive rebounds.

South Alabama out-rebounded WKU 15-5 on the offensive end, and 37-30 overall.

“I don’t know when’s the last time we’ve been out-rebounded,” Head Coach Mary Taylor Cowles said. “That’s been a big pride factor for us this year knowing how aggressive we can be on the boards, and how good we could be at both ends, and tonight we didn’t take care of that.”

Despite the sluggish second half, the Lady Toppers sill had the chance to put the Lady Jags away late in the game, holding a 49-46 lead in the final two minutes.

But consecutive layups by guards Mansa El and Mary Nixon put South Alabama up 50-49, setting the stage for fellow guard Sarda Peterson to hit the biggest shot of the night, a three-pointer from the right corner with 31 seconds left.

“(WKU) went man-to-man for that possession and we were able, with our penetration just to get her free in the corner,” said Pietri, who won his 200th career game on Saturday. “And they were running at her, but she just gutted it up, put it up there and hit a big shot that was separation.”

Owens was the only scorer in double figures for WKU, scoring 14 points on 5-of-8 shooting.

However she took just one shot in the second half, a stat with which Cowles was frustrated.

“We still didn’t find a way to get LaTeira Owens the basketball,” Cowles said. “And when she’s 5-of-7 in the first half and ends the game with one additional shot attempt, there’s something wrong with that.”

It was the fourth straight loss for WKU and the fourth consecutive loss during which the Lady Toppers took a halftime lead to the locker rooms.

“It’s frustrating because the coaches are trying to find something that can get us going and keep us over this hump that we have,” Owens said. “It’s frustrating. We’re going to try and figure it out in practice Monday.”

The road ahead doesn’t get any easier for the Lady Toppers, as they head to Murfreesboro, Tenn., on Wednesday to tangle with rival Middle Tennessee State.

MTSU is 18-5 overall and 10-0 in the league and features Ebony Rowe, the Sun Belt’s second-leading scorer.

Cowles said “it’ll be interesting” to see how her team responds against MTSU.