WKU fills needs with Class of 2012 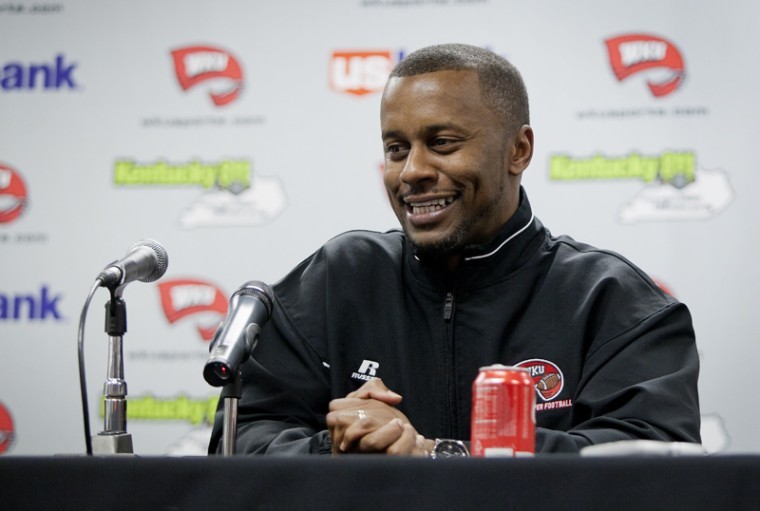 Head football coach Willie Taggart address the media Tuesday afternoon. Taggart said that this recruiting class will add depth in areas in which the Toppers need it.

A 13-player signing class won’t be the one of the biggest by quantity that Willie Taggart ever signs at WKU.

But the Toppers’ head coach said Wednesday he thinks the Class of 2012 has a chance to be one of the best to ever arrive on The Hill.

Thirteen players signed letters of intent to WKU on Wednesday as a part of National Signing Day, including seven that were rated three-star players by Rivals.com three-star — the highest percentage of three-star signees in Topper football history.

“I think our coaches done a great job of going out and identifying needs and then making sure we got the needs that we needed in order to continue to build our football program,” Taggart said Wednesday afternoon. “I like the class that we put together and I feel like this class may have the chance to be one of our better classes.”

The Toppers’ class was ranked No. 2 in the Sun Belt Conference by Rivals, trailing only defending league champion Arkansas State.

Taggart said the smaller number of available scholarships made for a “frustrating” problem, because his staff had to turn away some players they would’ve liked to take.

Teams are allowed 85 scholarships for football and by comparison, the Toppers signed 26 prospects in 2011.

“There’s a lot of good football players that wanted to be at WKU but we couldn’t recruit them because we had needs that we needed to fill,” Taggart said.

Two of the Toppers’ biggest recruiting coups of the day came from the city of Louisville.

Pearson, a 6-foot-3, 265 pound prospect, was rated by Rivals as the No. 36 defensive tackle in the nation and the No. 5 prospect in Kentucky.

Rivals listed Pearson with offers from Alabama, Louisiana State, Wisconsin and other Bowl Championship series programs, but his grades have been in question.

Pearson told the Herald he needs to achieve a 22 on the ACT to attain eligibility.

“I’ve been going every day to ACT workshops and looking at ACT booklets at home so I can get eligible,” he said. “But I don’t want to just achieve a 22, I want to be greater than what everyone else expects… You read any kind of blog or anything like that everyone’s always downing me, saying ‘I bet you can’t do it.’ That just puts a big chip on my shoulder.”

The other three-star Louisville-area recruit, Wales, chose WKU over his hometown Louisville Cardinals, the team to which he had pledged his commitment in January.

Wales was a record-setting running back in high school, running for 40 touchdowns apiece for Central in 2010 and 2010.

Wales told the Louisville Courier-Journal that Louisville wanted Wales to gray shirt and enroll in the spring of 2013, while WKU gave him a chance to contribute right away.

“It’s always great when you can get in-state kids of that caliber,” Taggart said of Wales. “We’ve said from Day 1, we want to get those kinds of kids to not only stay in the state but come to WKU. It’s great that we’ve been able to open that door now, and I think Ace is a tremendous football player.”

Together Pearson, Wales, Elliott and Louisville Trinity offensive lineman Tyler English made for four in-state signees for WKU out of the 13-player class.

Comparatively, Taggart had just one Kentucky player each in his Classes of 2009 and 2010.

“Man that’s big time,” Taggart said of the in-state recruits. “When you a recruit at home and get some big time players here to come help your football program, that’s always big.”

Other signees for WKU included:

There were, however, some recruits that got away from Taggart and his Toppers.

Taggart also said offensive lineman Curtis Williams of New Berlin, N.Y., (Milford Academy) “won’t be with us” despite an earlier commitment to WKU.

The Toppers also didn’t sign a kicker in the class, though Taggart said in December that position would be a goal for the winter recruiting period. WKU did, however, add Clay Nelson from South Warren High School in Bowling Green, as a walk-on.

But Taggart and Recruiting Coordinator Eric Mathies said they were both pleased with the 13 players that did commit.

Mathies, who has been an assistant with WKU since 2005, said the team’s 7-5 record in 2011 was a big boost on the recruiting trails.